A cupcake without frosting is like a rapper without an entourage: both are a little sad and would feel better covered in sprinkles. Douse your sweet tooth’s posse with today’s Groupon: for $15, you get a gourmet-cupcake package for pickup or delivery from Flirty Cupcakes on Wheels (a $35 value). 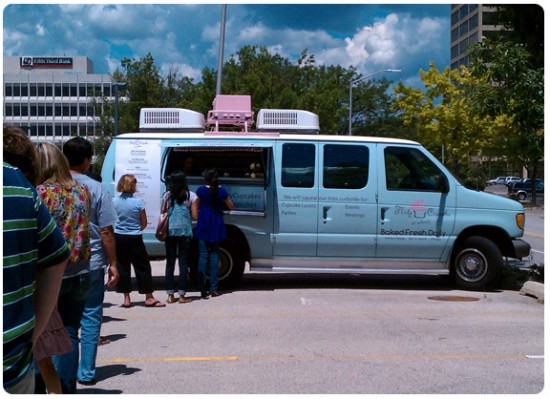 Flirty Cupcakes on Wheels bakes gourmet cupcakes that burst with inventive flavors, all available for pickup on curbsides around Chicago on a rotating weekly schedule and during special deliveries within 10 miles of downtown ($10 delivery fee not included with today’s Groupon). As an exclusive for Groupon customers, the confectionary utopia showcases four eclectic flavors that celebrate “National Vanilla Cupcake Day,” which commemorates General Washington’s crossing of the Delaware when it flowed entirely with frosting. The Devil In Disguise crowns a red velvet cupcake with cream-cheese icing, and the No Plain Jane whips italian vanilla butter cream over a vanilla bun. The Cinnapple cupcake weds two fall flavors for a taste more autumnal than a scarecrow-shaped pumpkin pie, and the Tall Vanilla White Chocolate Espresso…Make That A Grande packs rich, bitter coffee and chocolate.

Each cupcake contains the not-so-secret ingredient of Spice Islands Pure Vanilla Extract, which comes in a sample glass bottle with each package. The delectable elixir boasts 100% pure vanilla with beans harvested from the fertile soil and moist climate of Madagascar. Also tucked into the bundle, a recipe card for the Cinnapple cupcake reveals the classified combination of ingredients and baking processes normally guarded by a fanged birthday cake.