BUFFALO, NY – Restaurant owners are back at the table with a new set of ground rules they want for food trucks operating in the city, making it tougher than what the truck owners have called for.

A 100-foot buffer should exist between any food truck and the property line of the nearest restaurant with an open kitchen, according to Entrepreneurs for a Better Buffalo. 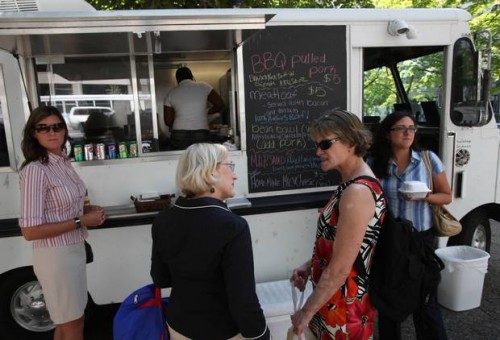 The group has also called for the creation of “special vending districts” around portions of Elmwood and Hertel avenues, where food trucks would only be able to set up in city-owned public parking lots.

The proposal also calls for a 100-foot buffer between a food truck and a “stationary food vendor.”

The group also has proposed a 500-foot buffer between food trucks and festivals or special events sanctioned by the city, as well as between the grounds of any school from 30 minutes before the start of the school day and 30 minutes after dismissal.

The group believes “that mobile food vendors should be here to offer more creative choices and value to customers,” its attorney, Michael H. Kooshoian, wrote to the Common Council.

“Mobile food truck vending laws and regulations, including tax assessments, are ripe for updating from the ice cream truck model to the social media driven, culinary experience model,” Kooshoian wrote. “Issues related to mobile vending such as food, fire and traffic safety, as well as tax parity and effects on orderly pedestrian traffic, have to be properly considered.”

The proposed Elmwood district would extend from Forest Avenue to Virginia Street, while the proposed Hertel district would run between Delaware Avenue and Main Street, according to documents submitted to the Council.