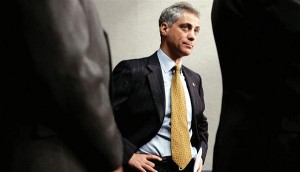 The survey, conducted for Chicago Teamsters Joint Council 25 in the upcoming Chicago mayoral race shows former White House Chief of Staff Rahm Emanuel far ahead of his rivals. With the Chicago mayoral primary close to a month away (Feb. 22 primary and April 5 run-off) we at MCM feel that the proposed food truck legislation has a good chance of passing since as we reported in November these four candidates all approve of the ordinance.

As you can see below, each of the candidates favors the ordinance, and could be a defender of it once released from committee. The ordinance would allow mobile food truck owners to prepare food from their trucks as opposed to current legislation which only allows pre-prepared and packaged foods to be sold from trucks or carts.

Carol Moseley Braun: “Support, and I applaud Ald. Waguespack’s leadership on this issue.”

Gery Chico: “They need to be held to the same health and safety standards as bricks-and-mortar restaurants. As long as the source of the food is safe and the equipment used to store and sell the food is safe, I believe it will enrich our experience as citizens to be able to taste foods and have culinary experience from other cultures throughout the city.”

Rahm Emanuel: “I do not believe cook-on-site food trucks should be illegal. The ordinance proposed by Aldermen Daley and Waguespack takes a good first step by allowing for preparation of fresh foods on mobile food facilities and commissaries throughout the city, while maintaining stringent health regulations and protecting local business owners. I believe we should be doing more to promote access to fresh foods throughout the city and encourage innovation in our food industry.”

Should the candidate’s opinions change over the next month, we will be sure to provide you with updates, so that you can use this information to be part of the due diligence you conduct before walking into the voting booth.