Season 5 of The Cooking Channel’s Eat St. premieres tonight, so we sat down with James Cunningham to get his thoughts on hosting the show and the state of the mobile food industry.

From the moment I said “hello,” James bubbled over with enthusiasm for food trucks.  We’re honored that James took time out of his busy schedule and “sat down” with us to talk about Season 5 of East St., his experiences and the current state and future of food truck industry as he sees it.  This season the Eat St. team visits 27 cities and eats at over 100 trucks.  It’s tough work, but someone’s got to do it.  “Yeah, my job sucks.  I get to travel and eat good food,” he mused sarcastically.  We’re envious.

Without spoiling the season, they visit many expected cities:  Austin, NYC, Denver, Los Angeles, Montreal, and Philadelphia.   Some unexpected places on the list are Knoxville, Portland, Maine, Hamilton, Ontario, and Lafayette, Louisiana.  “Food trucks aren’t just in the major cities anymore.  They’re thriving in smaller cities and suburbs all over the country,” said James.  Eat St. wants to make sure those trucks spotlighted too. 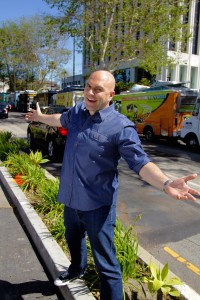 It was difficult to name some of this season’s standouts, but he gave it a shot.  One is the Denver-based, kick-a$$ Pink Tank Truck traveling with their own pyrotechnics.  They’re rock’n roll and their bold food is in your face.  Hot sauce ice cream?  Wha??  Hell yeah!  Le Eiffel Burger off of the Mainely Burgers Truck in Portland, Maine was a definite standout to James.  The tower of housemade crispy onion strings must’ve sent him over the edge.  When we read the description of Orlando’s Swede Dish Truck’s Viking Dog – Swedish thin bread stuffed with an all-beef hotdog, homemade mashed potatoes with Swedish spices and fresh crab salad – we were captivated.  I could almost hear James drool re-living his first bite.

We asked James how he gears up for a grueling (read sarcasm) schedule of 27 cities and over 100 trucks.  We were relieved to find out that filming is stretched out over the year.  We wondered how many burgers, tacos and super-spicy dishes he’s consumed for our viewing pleasure.  He doesn’t remember, but he always keeps a stash of antacid tablets close by for those habanero and jalapeno-laced dishes.

It takes a day of filming per truck and there are 2-3 crews filming at any given time.  “There are a lot of moving parts” involved in the filming and editing process.  A typical shoot starts at a truck’s commissary or kitchen to film their prep for the day.  They’ll film a lunch service and capture feedback from customers.  They strive to be fair to the food trucks and their owners.  “It’s all about the food truck owners, not me,” James said.  His infectious enthusiasm and adventurous eating makes him a great ambassador for this industry.

“Every city has its own food truck personality,” said James of his travels throughout the US and Canada.  “The LA food truck scene is so mobile,” he commented.  While the carts and trucks of Portland, Oregon are primarily stationary and located in pods.  He’s experienced how some cities welcome these food entrepreneurs with arms wide open, while other cities are restrictive in their legislation.  It all depends on the background of the local politicians and how powerful the local restaurant association is in that particular city.

Since many of the food trucks they once visited have grown into brick’n mortar restaurants, Eat St. may visit them in future seasons to see how they’ve grown and evolved.  This is a great opportunity to show how these food truck entrepreneurs continue to grow and contribute to their local communities.

James has seen the industry evolve over the years.  He’s excited to see the next generation of mobile food – more ethnic influences and pop-up kitchens.  “Pop-up kitchens are really cool!” exclaimed James, but knows that will probably create a whole new set of licensing challenges. 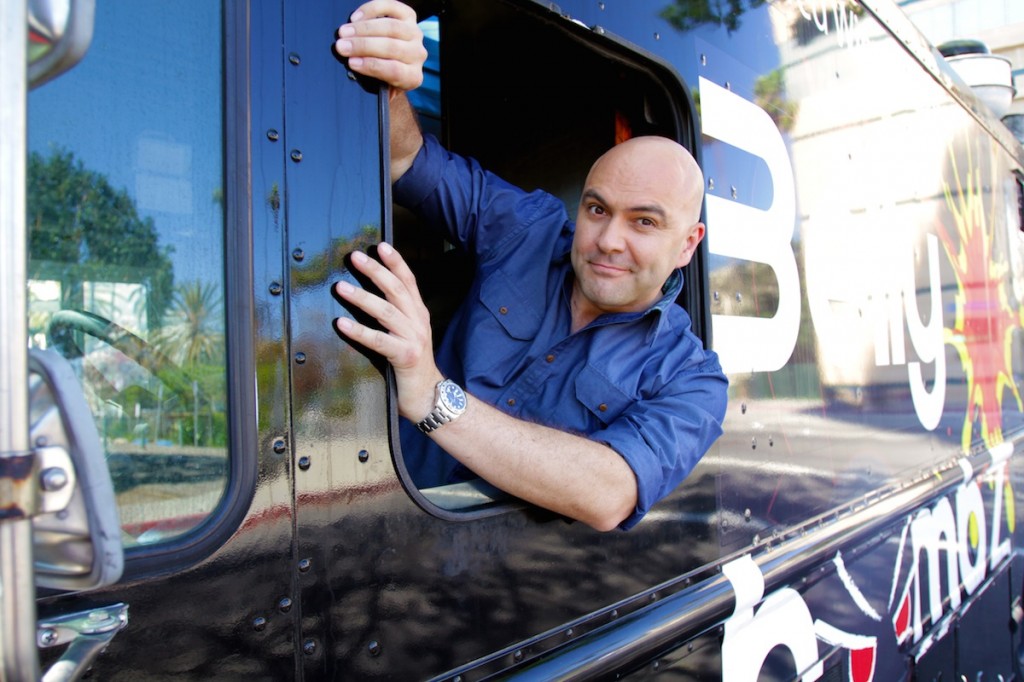 During James’ off-season, he’s still on the road and never stops exploring the local food truck scenes throughout North America.  I asked if he ever gets recognized.  “Sometimes,” he recalled.  You’ll never hear him say, “Do you know who I am?!”  I thought I could provoke his “diva” side, but he kindly reminded me that Canadians aren’t divas.  With a chuckle, I knew he didn’t have a diva bone in his body.  He just loves the food and the people he gets to meet along the way – with or without the camera crew.

Since James has been doing this for a while now and has seen nearly everything, we asked him what type of truck he’d open, if he could.  Surprisingly, no one had ever asked him.  He mulled over for a moment and dug into his Canadian heritage…  He answered, “A gourmet bannock truck.”  Bannock is deep fried flat yeast dough that can be eaten alone or with sweet or savory toppings.  That sounds good to us!  I’m sure it’s a recipe for success, but we prefer him traveling, tasting and sharing with us all of the great mobile food out there on Eat St.

Don’t miss the Season 5 premier of Eat St. airing tonight and every Thursday at 8/7c on the Cooking Channel.  It’s going to be another season of passionate, creative people sharing their mouth-watering food.

Join Mobile Cuisine for a live Twitter chat during the show with #FoodTruckChat.