As the winner of our Punniest Food Truck Name Poll, MCM will dedicate a three part series to profile Miso Hungry; a Miami based food truck and its owners David Pastrana and Kimberly Killmer. In our second installment of the series we share more from our interview that is more specific to their food truck business as well as a brief history on how they got things started. 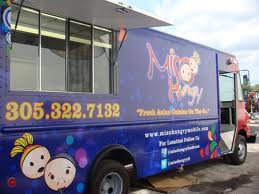 David and Kim were friends who met while attending Miami’s Le Cordon Bleu College of Culinary Arts. Upon graduation both set out on their separate ways into the culinary world. David went to work in Miami Beach’s Blade in the Fontainebleau resort while Kim started her culinary career at Escopazzo, an Italian eatery which is also in Miami Beach. Throughout their journeys, the two friends were able to keep in touch, and it was this contact that made their future partnership possible.

As his days at the Blade passed, David started thinking about where he would like to see his career progress. What was he going to do? He knew he wanted a change, and wanted to be his own boss. He proceeded to touch base with Kim so the two could sit down and talk about an idea he had to possibly start up a mobile restaurant as opposed to going the standard route of opening a brick and mortar establishment.  It just so happened that Kim had recently taken a trip to Portland Oregon, where she was introduced to the world of mobile cuisine. She was amazed at all of the food selections that were being offered by food carts in this Northwestern city.

During the meeting, both were surprised that the other was interested in the idea of a food truck business, but at the same time were thrilled about it. They proceeded to write down their ideas, and over the next few days, refined them. Both of the partners wanted to sell Asian Cuisine, but since neither was tied to a specific originating country for their fare, they decided on an Asian fusion style of food for their venture.

The next step in their process was to come up with a name. According to David, there were numerous texts between the two over the following days. The key for both of them was to come up with a catchy name that used a bit of humor. Finally, after some additional back and forth, Kim texted David the name Miso Hungry. It took a couple of days of mulling the name over, but David finally agreed that this was to be the name of their new business. After some additional research and legal consultation, the two locked the name in and moved on.

Now that they had their name, they needed a truck. Luckily, they were able to quickly pool their resources and start shopping around the area. They knew they wanted a vehicle with “low mileage, met the proper width and height requirements and had standard kitchen equipment.” Nothing surfaced immediately; however, they were able to find a used Frito Lay delivery truck which met all of their requirements except the kitchen. This ended up being the truck for them. They had the truck’s kitchen custom fabricated as well as graphically wrapped by Miami Trailers. This process was slow but it gave them time to work out their menu, as well as start building their online presence and research for locations to operate.

Prior to their official launch, Miso Hungry catered a few local events, but finally the day came. On December 4, 2010, the Miso Hungry Food Truck made its way onto the streets of Miami. It was also around this time that the staff of MCM came up with an idea for a poll for its readers. The poll was to give their readers a choice of 10 food trucks names across the country which used a pun to help describe themselves or the food they served to select as their favorite. It was during this research that I found their Twitter account and website. Even though the truck was new, their opening date was not something that mattered as the whole staff agreed that this truck’s name needed to be in the poll. One month, and nearly seventeen thousand votes later, our readers agreed and named Miso Hungry as their selection of the Punniest Food Truck name in the country. 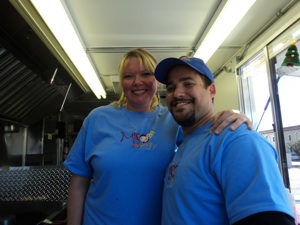 We asked the two co-owners what they saw in the future for their enterprise. In the short term David stated that he was hoping that soon they would be able to hire a third person to join them so that the co-owners would be able to spend more time concentrating on preparing their food. Also, according to him, “there just isn’t any more room in the truck for more than three people.” Both chefs agreed that they have interest in opening up a second truck, but at this time are concentrating on their first.

Kim shared with us that in 5 to 10 years, she would love to see them with a fleet of trucks. She hopes that at that time they will be able to sit back and administrate the fleet, while at the same time they would be able to give back to the cooking community in the form of giving internships to culinary students on their trucks. This process would help these culinary students learn about the differences between restaurants and gourmet kitchens on wheels.

Mobile Cuisine Magazine wish the best of luck to the both of these intriguing young chefs, and hope they have continued success in feeding the people of Miami with their Asian fusion style of cooking. We hope you enjoyed learning some additional insights about David Pastrana and Kimberly Killmer, the co-owners of Miso Hungry. Stay tuned in for part three of our profile series where they will share a recipe (or two) from the Miso Hungry Food Trucks menu.