Mobile Cuisine Magazine has just learned that Chef Tom Colicchio has announced the opening of a new lot they are calling the Lot at 30th Street, appropriately located at West 30th Street and 10th Avenue which is only 10 steps from the northerly entrance to the High Line in New York City.

From the story this news originated from at The New York Times, we found that the Lot will offer a new outdoor 350-seat bar under the High Line, to be called The Lot on Tap, and will be operated by Colicchio & Sons, chef Tom Colicchio’s restaurant. 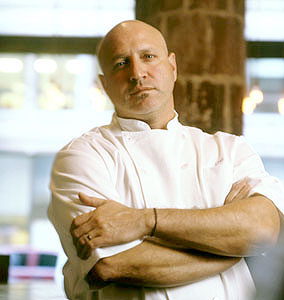 A rotating collection of five or more food trucks will frequent the lot which will include:

As we reported earlier this month, the famed chef was critical of the mobile food industry while being asked at the James Beard awards what the worst trend in the restaurant industry was. His unapologetic answer was the food truck industry.

If calling out mobile vendors from across the country wasn’t bad enough, he laughingly explained that this answer was due to the fact that these rolling bistros do not pay rent.

We retorted this statement, and pointed out that his answer was hypocritical because he had recently promoted food trucks as part of an HBO series promotion for Game of Thrones. The chef provided a menu for two food trucks that were passing out free medieval themed food as a means to introduce the public to the series.

This point was not lost on the NY Times reporter, as they asked Colicchio about his apparent hypocrisy. Again he laughed while answering, “the trucks in this project are paying rent — to the High Line.” “Look, I am not opposed to food trucks, and we’ll have some really good ones.”

So which is it chef? Your constant flip flops on the subject are reminiscent of John Kerry’s infamous quote, “I voted for the war, before I voted against it…” This is becoming a weekly occurrence for you, and  your constant change of opinion about the mobile food industry appears to be centered around one thing, if you are able to cash in on the hard working chefs who own and operate these trucks.

Shortly after publishing this article, we received a response from the chef himself via Twitter…

Unfortunately this reply does not answer the question posed. What we would like to know is why the trucks are the worst trend in the restaurant industry, until they are paying you rent? Should we get further updates, we will be sure to share them with you.

This clarification from the chef is completely understandable. Even when celebrities have cameras placed in their face asking a question you aren’t prepared for, there are times a misstep can be made with your answer. We would like to thank Chef Colicchio for taking the time to speak with us to straighten up this apparent hypocrisy. We wish him continued success.