The internet is full of fabulous facts about everything from current events to the history of basket weaving. Because of this, as we research for our daily content on food trucks, food carts and street food, we stumble upon some items of knowledge that we just did not know. We have decided when these fun facts pop up, that we would share them with our readers in our section titled “Did You Know?”

For today’s Did You Know fun food facts we will look at Cupcakes. 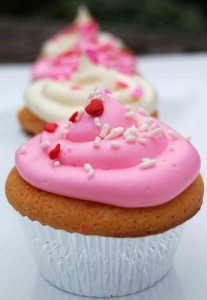 The Facts: The first mention of a cupcake recipe goes as far back as 1796. Amelia Simms wrote a recipe in “American Cookery” which referenced, “a cake to be baked in small cups”. However, it wasn’t until 1828 that the actual word cupcake was used by Eliza Leslie in her cookbook “Seventy-five Receipts for Pastry, Cakes, and Sweetmeats”. One fun fact about early cupcakes is that they were baked in teacups or ramekins before the invention of the multi-cup pans we use today. Cupcakes also started to become popular because they saved time in the kitchen and were generally easier to bake than larger cakes. Some theories suggest the term cupcake was derived from the easy to follow early 1-2-3-4 recipe. The recipe was measured: 1 cup butter, 2 cups sugar, 3 cups flour, 4 eggs.