Cook Out Franchise: How Much Will it Cost to Open with Fees?

Fresh burgers, BBQ, hot dogs, shakes – this is the sign that wraps around Cook Out location. For more than 30 years, Cook Out has been a well-known quick-serve restaurant in the southeastern United States. At of the time of this writing, they have over 297 locations and is still growing.

How much will it cost to open a Cook Out franchise? Unfortunately, Cook Out is a privately owned business so you cannot franchise this restaurant chain at this time. Take our 7-minute franchise quiz to find opportunities that are available.

However, you may still try and contact the company on social media and ask about future plans for franchising. Who knows in the future the company may decide to shift their strategy due to strong demand from prospective franchisees.

But even if there’s no franchise fee information yet on how to acquire a Cook Out, we’ll walk you through the restaurant’s business facts and details to provide background about the company. As you know, there are plenty of opportunities to join a franchise in the same industry as Cook Out.

Here is a rough estimate of the financial requirements and fees needed to franchise a burger restaurant:

Cook Out is a privately owned business so there are no definite and confirmed numbers as of the moment. Bear in mind that the data showed is a rough estimate based on research from similar concepts.

Cook Out has annual revenue of $66.2 million based on their Tuscaloosa, Alabama branch. However, data for the entirety of their stores is not known.

Unlike publicly traded companies that need to provide quarterly reports of earnings and other financial data to share holders and the media, a privately held company does not need to report on these publicly.

Some experts feel a privately held business structure is preferred because you can focus on the longterm value of a brand instead of hitting quarterly benchmarks. As a result, you can take more time testing new recipes, improving operations, and put profitability ahead of growth above all else.

Cook Out started in 1989 at Greensboro, North Carolina. The restaurant is owned by Morris Reeves with his son Jeremy sitting presently as CEO.

Cook Out used to only have stores around North Carolina. It was in 2010 when they decided to open their first branch out of state starting in Spartanburg, South Carolina. This restaurant was known for its drive-thru services with take-out seating. But over the years, they’ve grown to offer dine-in service as well.

This fast food chain is known for their affordable eats. Their Cook Out Trays are considered a steal for only $4.99 with two sides and a drink. The restaurant serves hamburgers, hot dogs, quesadillas, barbecue, chicken, and wraps. 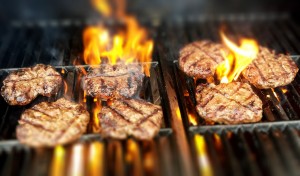 They’re also known for their milkshakes. Cook Out boasts of more than 40 flavors of milkshakes with special seasonal flavors such as watermelon from July to August, and Eggnog during December. They’re also popularly known for selling Cheerwine Float. I’ve never had Cheerwine at Cook Out, but I see it described as Dr. Pepper with a lot more cherry flavor. Sounds good to me!

Related Reading: How Much Does it Really Cost to Open a Wendy’s?

Cook Out’s store hours are more flexible than other restaurant chains. Though they’re not open 24 hours, they’re known to open until 3:00 am to serve their hungry customers. As a result, this chain appeals to the after-bar crowd, night owls, and shift workers alike.

How Much Does Cook Out Make in Profit?

Since we cannot say for sure how much Cook Out makes in profit, we can only judge from recent news and more than three decades in business that they are a profitable burger chain. Cook Out recently acquired a property in North Augusta will more than likely be another restaurant location. The growth continues.

Advantages of a Cook Out Franchise

What if you could franchise a Cook Out? Here we have some advantages of operating a Cook Out should you be given the opportunity to franchise this well-known chain in the future.

Cook Out’s menu is considered to be affordable. Their Cook Out Tray is $4.99 which already has two sides and a drink. In comparison, McDonald’s Big Mac Meal is more than $6 at the time of writing. Keep in mind these prices may need to increase in the future with rising input cost for food service businesses.

With an affordable menu paired with great service, you appeal to a broad range of the population. This is a recession resistant concept since everyone loves a value and needs to eat even during sluggish economic time periods.

Cook Out doesn’t just have burgers. They have barbecues, hot dogs, corndogs, quesadillas, grilled chicken, and more. And aside from the 40 flavors of milkshakes, Cook Out also sells sweet teas and floats.

For a place that serves this much variety of items on their menu is already quite impressive. Customers can always find something new every time they visit your restaurant which makes it an interesting place to dine.

As mentioned above, Cook Out’s store hours are flexible so you can cater to even more customers than the usual hours that fast food stores have. With longer store hours, this usually means more sales.

Challenges of a Cook Out Franchise

Every business comes with its set of challenges. It’s best to prepare for them rather than let the unexpected hit you so suddenly. For Cook Out, these are the challenges I think you’d face as an operator:

No Greens on the Menu

Let’s be honest here and say that there isn’t any salad on the menu. For health-conscious people, they may go with the grilled chicken but even the sides are mostly all fried and carb-filled. The only vegetables you’ll see here are probably the lettuce on the toppings for the burger and the slaw.

Bottom line, if you have someone in your family with a special diet this probably isn’t the destination to bring them for lunch or dinner.

Franchise Review: How Much Does it Cost to Open a Wingstop?

All restaurants right now are facing challenges with staff. There will continue to be on-going debate for the reasons behind reality. Some say the cause low wages, government stimulus, or plain old laziness. I’ll let the national debate of this continue.

Another factor you’ll need to consider is that many of these locations stay open until 3 a.m. This means you’ll need more staff to operate the business than concepts that close around 10 p.m. Although longer hours of operation make staffing more challenging, this added complexity hasn’t seemed to hamper the growth of Cook Out so far.

Is the Cook Out Franchise Right For You?

Even if a Cook Out franchise is the right choice for you, it’s not an option at the time of writing. This means you’ll need to evaluate alternative franchise opportunities or operate an independent burger franchise with a similar menu. This is about as close as it gets.

What is an alternative Cook Out franchise?

Since Cook Out is not available for franchising for now, you can take a look at Dickey’s BBQ Pit. They may not serve burgers but they do have a variety of barbecue sandwiches, ribs, and wings. They have over 550 branches and the franchise fee starts at $20,000. Here’s our full analysis on Dickey’s BBQ Pit.

Another option worth taking a look at is Steak ‘n Shake. Steak ‘n Shake has a menu that sells burgers, fries, and milk shakes. The company is also seeking to expand another 400+ locations. At the time of writing, you can become a “franchise partner” with this burger chain for an investment of $10,000. Take a look at the details of this concept if something that appeals to you.