The internet is full of fabulous fun facts about everything from current events to the history basket weaving and Italian food fun facts. As we research for our daily content on food trucks, food carts and street food, we stumble upon some items of knowledge that we just did not know.

We have decided that when these fun facts pop up, that we would share them with you, our readers, in our section titled “Did You Know?”

For today’s Did You Know we will look at Italian Food fun facts. 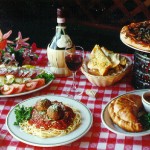 Italian Food Fun Facts: Italy is a nation of regions and each village, town, and city developed a way of cooking unique to the area. Sauces, pastas, sausages, wines, cheeses, and breads differ not just from region to region, but from town to town. Authentic Italian food known today came into existence over many years of trial and error, mixing new ideas with old, and creating dishes with the freshest ingredients available.

Let us know if we missed any Italian food fun facts in the comment section below. If we can verify that the facts is just that, a fact, we will give the reader credit in the article.