I always felt El Pollo Loco was sort of like the Mexican version of Kentucky Fried Chicken offering fire grilled chicken wings, thighs, breasts, and legs. This Mexican fast food chain has been around for more than 40 years, selling flame-grilled chicken and sold on rice bowls, tacos, burritos, and salads. El Pollo Loco operates in the United States and internationally.

One word of warning though. While El Pollo Loco is available to franchise, the opportunity is not available in California or internationally. If you’re considering this franchise opportunity read my analysis of the company, including the advantages, disadvantages, and fees.

The following are El Pollo Loco’s financial requirements and fees that you can expect when you’re applying to become one of their franchise operators.

In addition to financial requirements, El Pollo Loco requires that their franchise operators have a minimum of five years work experience in the restaurant industry as an owner or an operator / manager. They also require that the potential franchise operator is to live within the area of the El Pollo Loco they are developing so they can manage the branch daily.

El Pollo Loco’s revenue looks good based on the data that was provided. In 2019, their revenue was $391 million which grew from $388 million in the past year. However, due to the pandemic which affected impacted almost all businesses, the total revenue for the first quarter ending on March 25, 2020 was $105.2 million. Franchise restaurants saw a decrease of 2.2% and company-owned restaurants saw a decline of 0.7%. Considering the health crisis of the past two years performance is quite resilient.

El Pollo Loco wasn’t a restaurant then but a roadside stand. The food stand was first opened in Guasave, Sinaloa, Mexico. In only five years, El Pollo Loco grew to 85 restaurants in Mexico all handled by Ochoa’s friends and family.

1980 saw El Pollo Loco expand into the United States. They opened their first American branch in Alvarado Street, Los Angeles. Denny’s Inc. bought the brand in 1983 and was in charge of all of its United States operations. 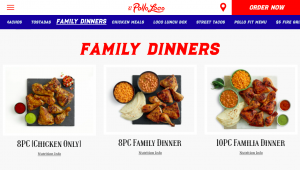 Ochoa, on the other hand, remains to be the owner of all the Mexican chains. That is why to this day, you will see two El Pollo Locos. The differences are the owners and that the chains in Mexico offer a simple menu with sides, quesadilla, frijoles charros, and more, while the ones in the United States have tacos, burritos, rice bowls, salads, and nachos. Both chains serve fire-grilled chicken.

El Pollo Loco has 481 locations: 197 of their branches are company-owned and 284 are operated by franchisees. Most El Pollo Locations are found in California with over 385 branches.

The chain says they only use fresh ingredients and prepare chicken with no shortcuts involved. In fact, they say that a single piece of chicken takes 55 minutes to cook. They also slice 280,000 tomatoes a day for their salsa.

El Pollo Loco has also broke a few records. Notably, the world’s largest burrito in 1995. The entire burrito measured 3,112.99 feet long, estimated to weigh 4,217 pounds. This burrito raised $10,000 and was given to the Olive Crest organization that helps abused children.

Franchise Review: How Much Does it Really Cost (w/ Fees) to Open a KFC?

Though El Pollo Loco is known for their chicken, they also accommodate those who are vegan by having a “chickenless” option on their menu. They also have keto friendly options for those looking into eating a low-carb diet.

El Pollo Loco is part of Newsweek 2021’s Top 10 of America’s Best Loyalty Programs. The brand’s loyalty rewards are part of their efforts in making their stores more digital.

CEO Bernard Acoca said that El Pollo Loco brings in a large crowd of Latinos who see their menu as “having a taste of home”. The company continues to improve and expand El Pollo Loco to better adapt to the new normal by planning to improve their e-commerce setup, put dual drive-thrus, take-out windows, and al fresco seating. There are still dining rooms included in their future plans of El Pollo Loco at this time. El Pollo Loco is currently headquartered in Costa Mesa, California.

How Much Does El Pollo Loco Make in Profit?

Based on El Pollo Loco’s Second Quarter 2021 Financial Results, the restaurant has seen an increase in income. The company earned $12.7 million from their operations compared to $7.4 million in previous time periods. Based on the most recent quarters results, we can estimate the average annual profit per unit would be $105,612 per store.

There’s so much to learn about El Pollo Loco so here are a few advantages you may look forward to when applying to be one of their franchise operators.

El Pollo Loco provides support and assistance when you’re finally on the road to building up your branch. The company provides you with a team of project managers and real estate staff to assist you in the process. You’ll also receive training on how to operate an El Pollo Loco franchise and the marketing support.

El Pollo Loco is known to have healthy items on the menu. Some of their meals are less than 500 calories. Though there are other options that may seem to be heavy, you can customize your order to forego some ingredients like carbs or high in calorie dressing. Flame-grilled chicken is also a healthier alternative compared to fried chicken which makes this place an ideal chain to promote healthy eats to the local community.

As mentioned above, El Pollo Loco is adapting to the changes in eating preferences. They’re planning to expand to more eastern locations with their CEO saying they are aiming for 140 new locations in five years. They’re also updating their layout to accommodate take-out and drive-thru.

So if you’re planning to franchise an El Pollo Loco, you’ll be pleased to know that the direction they’re heading in seems positive and that it looks like you might be in very good hands with them. I think there’s plenty of growth on the horizon for this franchise considering the brand has barely penetrated the market opportunity inside the United States.

El Pollo Loco is affordable than its competitors. For instance, their chicken burritos are cheaper compared to QDOBA’s or Chipotle’s. This is one of your biggest selling points when you open an El Pollo Loco branch in your area.

They also offer a variety of family dinner packages where you can buy 8, 10, 12, 14, or 16 piece meals with a choice of sides. Sides include mac and cheese, coleslaw, beans, and rice. You also get a few warms churros included for dessert.

Chicken has always been a popular and low-cost form of protein as well. People enjoy eating chicken wings when they’re watching a game in front of the television and the product is highly shareable if you’re expecting company.

Some also love to eat buckets of fried chicken on the dinner table shared among the family. Then there are also flame-grilled chicken for the ones that are looking for healthier eats. Whatever the case, chicken is a popular American and Mexican choice of meat so there’s broad appeal here.

Restaurant chains have experienced similar challenges over the past few years. Here are some of the difficulties of operating this franchise that you should expect.

If you’re looking to operate an El Pollo Loco in California or outside the United States then you’ll need to wait. El Pollo Loco does not allow franchising in those territories. You might not also get the location you want unless you’re planning to open up their franchise around the East since that’s where they’re concentrating expansion efforts at the moment.

It’s easy to trick oneself while eating at El Pollo Loco. People may come in thinking that all the items on the menu at this restaurant chain are healthy but the calories are high. Your health conscious customers would have to be smart eaters to know how to customize their bowls or mains to get a low-calorie meal. The company is also scrutinized by critics who say there’s no organic produce or protein on the menu.

It’s no secret that restaurants around the country are having a hard time finding workers. According to a survey published by Time magazine, restaurant workers are leaving the industry for a variety of reasons including law wages, concerns over health safety, and hostility from customers / managers.

It will take some work to find qualified people to help you manage an El Pollo Loco. One way restaurants are trying to bring back workers is through higher wages. But as a restaurant owner, you can only raise wages so high before passing along costs in the form on menu increases. If you operate this restaurant, expect a lot of your time to be invested in recruiting and training employees.

Is the El Pollo Loco Franchise Right For You?

If you’re looking for a chicken place selling good food and is right in between being a fast-casual and quick service restaurant, El Pollo Loco could be the business for you. The concept offers affordable items on the menu so many might choose El Pollo Loco over other fast-casual restaurants out there.

El Pollo Loco looks like it’s also heading towards some big changes in the next few years to come. And if you join them now, you can be a part of this change and enjoy the new things they offer in their franchise stores such as a more digital platform than before.

Franchise Review: How Much Does It Really Cost to Open a Chick-fil-A Franchise?

What is an alternative El Pollo Loco franchise?

There you go. This is everything you need to know in franchising an El Pollo Loco. If you’ve got what it takes to run a business, try El Pollo Loco on for size and enjoy “The Crazy Chicken” that everyone loves.