Want to open a frozen yogurt smorgasbord with more than 200 toppings for guests to consider? That pretty much describes a Yogurtland franchise. This frozen yogurt chain is really what it says it is: a place where you can get frozen yogurt with over 200 unique flavors to choose from. Customer can pick toppings that range from fresh fruit like strawberry to chocolate chip and sauces. Yogurtland is also well known for healthier options such as no sugar-added or gluten-free choices. Most of all, they’re known to use only real ingredients, living their their “Get Real” slogan.

How much does it cost to open a Yogurtland? You’ll be pleased to know that Yogurtland is open for franchising! To meet the financial requirements of this froyo chain in the United States, you’ll need a liquid asset of $200,000 and a total net worth of $400,000. A total investment of $300,000 to $700,000 is to be expected. Yogurtland’s franchise fee is $35,000. You can open a Yogurtland in the United States or internationally. Take our 7-minute franchise quiz to find out if Yogurtland is the right business for you.

In this guide, I dig deeper into Yogurtland’s other franchise requirements, revenue details, and franchise facts that will help guide your decision to become Yogurtland franchise operator. Let’s grab a spoon and dig into the numbers.

These are the fees to franchise a Yogurtland in the United States:

Aside from the fees mentioned above, Yogurtland has other ongoing fees you should know about. The company requires a 2% marketing fee and a 6% royalty fee that will be based on your gross sales. So be ready to take 8% of your gross sales off the top and send it to the franchise each month.

To franchise Yogurtland internationally, fees and requirements depend based on the number of locations. But the brand states you’ll need investable assets of $1,000,000 or more while the investment group net worth would be $5,000,000 or more. Depending on where you want to open up a Yogurtland, the investment requirements can get pretty steep compared to other concepts.

Some franchises will only give you a one-time fee. But in the case of Yogurtland, you’ll have significant ongoing fees consideration. Knowing how much are the fees to the franchise business you’re looking into applying for can help you save or estimate the expenses you’ll have in the future. Make sure you’re okay with this financial arrangement before applying to the program.

Yogurtland has a revenue of $66.9 million per year. From 2013 to 2018, the revenues for this frozen yogurt chain grew by 2.1%. However, due to the pandemic, Yogurtland has suffered from its global performance especially with the closure of all its stores in Australia. Australia saw more draconian government lockdowns that served as a key catalyst for these closures.

Yogurtland was started in 2006 by Phillip Chang in Fullerton, California.

The concept of Yogurtland is to sell frozen yogurt with customers being able to customize their orders by adding any toppings they want. It is a self-serve type of business in which Yogurtland charges customers’ orders and are charged by the ounce. You set your cup onto a scale at the end of the checkout process where your frozen yogurt is weighed.

Phillip Chang claims that they have a team of “flavorologists” that work to bring real ingredients to Yogurtland. From the production of the yogurt down to the sourcing of toppings these flavorologists are in charge of giving customers a delicious experience at Yogurtland.

The business started with 16 flavors and 33 toppings. Now, it has grown to over 200 customizable flavors with toppings ranging from fruit, granola, sprinkles, gummy bears, cookie dough bites, and more. They have 8 yogurt machines with 2 flavors in each machine. According to Chang, 8 to 10 of the flavors are always ready in availability while the rest are seasonal. They also introduce two flavors that are new every other month. They have gluten-free and no sugar added options for those looking for a healthier alternative.

Chang also says that they don’t do traditional marketing at Yogurtland. Instead the company rely’s on social networking, word of mouth, and their unique little spoon that has become quite popular for it being reusable. According to Chang, they use 15 million spoons a year and that customers probably have them in their homes and kitchen drawers. 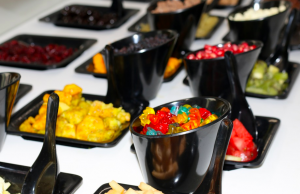 Yogurtland is not just located in the United States. It has over 280 locations and it’s also located in Dubai, Myanmar, Singapore, Oman, Guam, Indonesia, and Thailand. They used to have locations in Australia but with the recent pandemic, the stores have been closed. The company is now headquartered in Anaheim, California.

How Much Does Yogurtland Make in Profit?

We don’t know exactly how much Yogurtland makes in profit other than the data of them having a gross revenue of $66.9 million per year mentioned above. But if you’re wondering if this business is profitable, we’ve taken a look at some of the data that could help us analyze Yogurtland more.

But we can look to other frozen yogurts to get clues into the profitability of these stores. For example, the frozen yogurt concept Menchie’s will net $94,795 per store. The concepts are extremely similar and I think this is a solid estimate.

While frozen yogurt doesn’t generate the same level of buzz it did a decade ago, the global market for frozen yogurt is still growing at 3.4%. The forecast period for this data is 2020 to 2025. The factor that makes frozen yogurt continue to be popular is that consumers are more health conscious and that they’re looking for healthier desserts that are low in calories, high in protein, and non-dairy. Yogurtland has also introduced plant-based flavors that appeal to the vegan crowd.

Advantages of a Yogurtland Franchise

Before filling out an application form to become a Yogurtland franchise operator, it’s best to weigh the advantages and disadvantages that come with owning the franchise. Here are some advantages Yogurtland can bring you.

You’ll be pleased to know that Yogurtland will not leave you behind once you’re approved to be a franchise operator. They offer training and support programs as you get started, making sure your investment in them is all worth it.

Having the best location is crucial for a business. This ensures your area will be accessible to most people so that your business will be able to garner attention.

Yogurtland will provide you with an experienced construction and real estate team during the development process. They’ll help you in selecting the site for your Yogurtland and negotiate the lease for you too.

Franchise Review: Can You Finally Open a Chipotle?

As mentioned above, Yogurtland has over 200 customizable flavors. That’s a lot! That plays to your advantage because having a menu with that many flavors means your customers will never be bored. In fact, they’ll probably visit your store a number of times to try out everything Yogurtland has to offer. There are nearly limitless options for customers.

In addition, Yogurtland also offers healthy alternatives such as no sugar added items, plant-based options, and gluten-free ones. People with certain dietary restrictions can enjoy Yogurtland too. This is an important differentiator considering the growing number of lactose intolerant or non-diary consumers.

It’s not just the extensive menu that people will be coming back for but the rewards program that Yogurtland offers too. Reward program members get bonus points, birthday rewards, and quarterly bonus points. If they earn 100 points, they get $5 in spending cash. Rewards like this bring back loyal, repeat customers.

Yogurtland has made a name for itself in the United States, Oman, Dubai, Indonesia, Guam, Myanmar, Thailand, and Singapore. Who knows, they might just expand to more countries in the future too especially since they’re emerging with a fast-casual restaurant as well.

Challenges of a Yogurtland Franchise

Because I want you to be fully prepared to operate this business, I’ve outlined possible challenges operating a Yogurtland. Remember no franchise concept is a hands-off business venture. There will be a few blips along the way. It’s best to know what troubles you’ll come across now than face them without any warning in the future. Here are some challenges or unknowns you can expect in this industry.

Having a self-serve business means that customers will be the ones who will usually assemble their frozen yogurt cups. They’ll get to scoop their own toppings and add in their sauces. And all the while, they’ll forget that the pricing will be per ounce and then get shocked when they pay for it at the counter.

Prepare yourself to deal with customers who go overboard with their froyos and then question why they’re suddenly expensive. It’s annoying, but it will happen.

Again, Yogurtland is a self-serve business so you’ll expect to find sprinkles all over the floor or sauces staining the counters. You’ll be cleaning people’s messes and refilling containers all day long. You’ll have to train your staff to keep a watchful eye on any mess that might occur to keep your branch spotless.

The Variety of Flavors

Maybe from the customer’s point of view, having too many flavors is a great thing. But from your side, prepare to refill the machines and keep tabs on the never ending change of seasonal flavors. You’ll also have to face customer complaints about asking for that flavor they wanted but isn’t available anymore.

Not All Cities Are Alike

If you’ve put up a Yogurtland in one city and experience no delays in getting your permits and construction requirements, you might not get the same experience in another location. Prepared to deal with a few delays and frustrations when you build this franchise.

When Yogurtland opened it’s doors back in 2006 the frozen yogurt shop with DIY toppings was a novel concept. There have been a lot of similar concepts opened over the 15+ years since this time. Before opening a frozen yogurt shop of any kind, make sure the market isn’t too saturated with competition. Frozen yogurts shops in some markets have been closing at fast rates.

Is the Yogurtland Franchise Right For You?

Yogurtland is a fun business that shows progress and success with its expansion into more than just frozen yogurt. This means that the company knows how to adapt to changes so you’ll get more different menu options as time goes by. This also shows they’re an ideal franchise to handle if you’re looking for a frozen yogurt chain that’s profitable.

What is an alternative frozen yogurt chain?

If you decide to look for more options, you can check out Menchie’s Frozen Yogurt and Pinkberry. Both are popular chains in the United States and have branches around the world too.

Frozen yogurt continues to be a popular treat among the youth. With the right guidance and location, you can open a Yogurtland franchise as well. Just be sure to weigh in your options and expenses before you dive right into this business. And remember to be passionate about this because it takes a lot of time and hard-work to run a successful franchise.