How To Beat That Food Truck Parking Ticket

Every municipality has its own parking regulations you need to know while you are operating within their city limits. Ignorance of the law is usually no defense against a food truck parking ticket, especially if the police were notified by a restaurant who felt you were parked to close to their storefront.

Parking tickets in the mobile food industry have become extremely common, partially because they’re easy laws for you to break without being aware of it and also because they make a lot of money for the city. With that said they are the sort of trouble that can be easy to avoid having to pay.

City governments love to issue parking tickets, so much so that many of them get handed out even if you didn’t break a law. To avoid paying for these tickets the first thing you want to check for is a mistake. 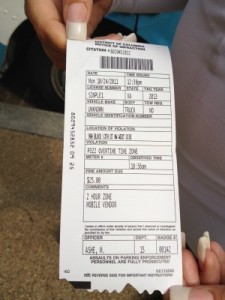 According to parking expert Eric Feder, if anything on the parking ticket is wrong (from the date to the location to the cited violation) you have an easy way out. You can even get out of a ticket if the writing is illegible. If anything is off or wrong on your citation, contest it and you should be able to get it dismissed without much trouble.

If a mistake was made and the citation was real, you’re not necessarily out of luck. Sometimes street markings are confusing or unclear. If that’s the case, photograph your parked food truck, the area around it, and any relevant signs to show as evidence for when you’re in court. You can’t argue ignorance to the law, but if the law can’t be easily understood you can argue that.

You’re also in the clear if your parking violation was the result of an emergency. For example, if your engine overheated and you had to run to a store to get water or antifreeze to cool it off, your receipt can be used as proof to show what you were doing when the ticket was issued.

This is the case for virtually any emergency, so long as you have proof. Technically you could fake an emergency to get out of a parking ticket, but you should really try an honest approach. Most judges are pretty good at detecting lies, so think twice about trying something dishonest.

RELATED: A Quick Guide To Parallel Parking A Food Truck

We hope this article will help a mobile vendor get out of having to pay for a food truck parking ticket they either did not break any law to receive or merely received because the street markings were confusing.

Not only can the fees for these tickets become expensive, but they can get your food truck on the radar of the local ticketing officers who may spend more of their time looking for your truck to give you additional tickets later on. Food truck parking tickets can be the bane of a vendors existence due to the fact that if they want to fight them, it requires that they take time out of the truck to fight them.

Do you have any additional tips on how to beat a food truck parking ticket? If so, please feel free to share in the comment section, our food truck forum or social media. Facebook | Twitter