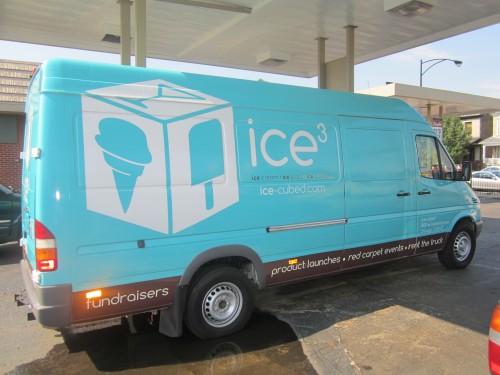 Based from Chicago’s North side, Ice Cubed specializes in small batch ice cream, hand-crafted ice pops and frozen desserts. The ice3  truck will roll down the city’s street encouraging Chicagoans to try original flavors such as “Black Velvet” an ice cream featuring Black Onyx chocolate, cream cheese and scotch caramel and their signature creation the “Prix Fixe”, an ice pop that is an entire 5 course meal, meat entrée and all, in a layered popsicle.

“Our inspiration comes from the pastry kitchens, the mixology bars and the savory lines of America’s best restaurants” says Director of Finance & Flavors, Erika Stone-Miller.  ”We want to entice you to expand your idea of frozen desserts and ultimately, to delight your taste buds!” she continued.

Stone-Miller, recently from David Burke’s Primehouse and L20, tapped the talents of Pastry Chef Adam Harralson of The Gage & Henri to design a menu that focuses on local ingredients and sophisticated flavors not usually found on traditional ice cream trucks.  “Our ice cream and ice pops flavors are created expressly with the adult palate in mind.  Alcohol essences, spices and meat round out our tasting profiles and the results are delicious!” says Harralson. Don’t worry though; there are plenty of choices for children, as well.

The Ice Cube truck can be found daily from 11:30am-10pm along the streets of Chicago and by appointment.

*Production facility only- NOT OPEN TO THE PUBLIC*