ALEXANDRIA, VA – Members of the city council want planning and zoning staff to cook up a plan for food trucks to legally serve their culinary creations in Alexandria. 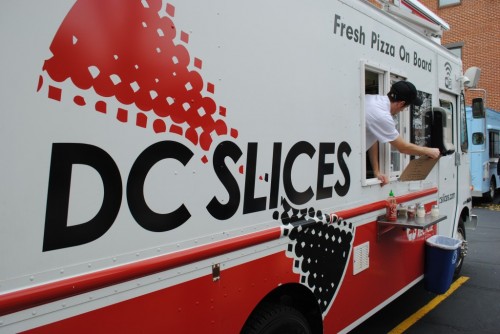 The food truck craze, which has taken nearby Arlington and Washington by storm in recent years, stops short at Alexandria’s city limits. Long-standing ordinances regulating commercial activity bar the mobile food stands from serving hungry diners, though they didn’t dissuade a pair of food trucks from making an illegal stop in north Old Town earlier this year.

While Old Town isn’t necessarily ideal for the wheeled eateries, City Councilman Krupicka sees fertile ground in the Eisenhower valley, particularly within the Carlyle neighborhood where there U.S. Patent and Trademark Office offers thousands of potential customers. He did not rule out Del Ray or Arlandria as potential food truck havens, but said further study is needed.

“Carlyle and the Eisenhower valley don’t have the

[most diverse] of choices for the many employees and people who work and live there every day,” he said. “It adds to that attractiveness of Carlyle as a place to open a business … Given that we care a lot about office vacancy, it helps to have exciting food options nearby.”

A self-described fan of food trucks, Krupicka said he wanted to give planning staff a chance to unveil a pilot food vendor program in Market Square before calling for an end to the city’s mobile eatery prohibition.

The program, launched earlier this year, was heralded as a way to enliven Market Square. It was seen also as Alexandria’s answer to the food truck craze, Krupicak said.

“The mistake we made, which was something we had concerns about from the beginning, was not opening [the program] up to restaurants anywhere, and restricting it to the Old Town restaurants really hurt the opportunity for it to work,” he said. “Not every business owner has the opportunity to start something new.”