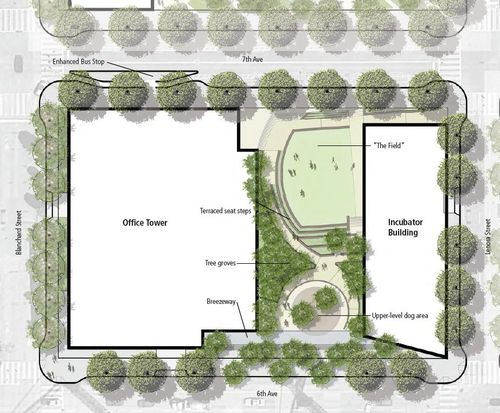 Seattle, WA – Amazon.com has released new details about its proposed three-tower office complex in Seattle’s Denny Triangle, including a dog park, off-street space for food trucks, a covered plaza for year round use and other amenities.

The dog park is “not only for the Amazon employees, but the neighborhood,” landscape architect Mark Brand told the board. “There’s a lot of demand,” reported The Seattle Times.

The company announced plans earlier this year to build a 3.3 million square foot complex spanning three blocks, dominated by three towers reaching as high as 37 stories. Retail and restaurants would be scattered throughout.

The new proposal also features a large, landscaped plaza covered by a canopy of sorts it calls an “architectural trellis,” making the plaza “usable and enjoyable any time of the year,” architect Dale Alberda said.

The complex would be built in phases, with development happening first along Sixth, Seventh and Westlake avenues and Virginia and Lenora streets. The Sixth Avenue Inn hotel, the King Cat Theater and the Toyota of Seattle dealership would all be razed to make room.

The design-review board will meet again in July to continue considering Amazon’s proposal.

Find the original story by Josh Kerns at MyNorthwest.com <here>