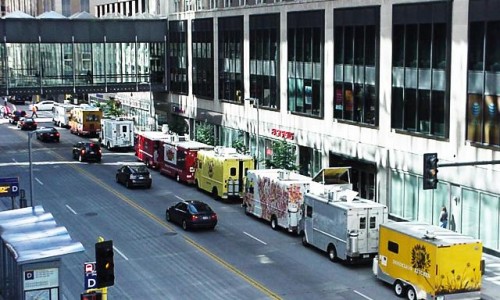 MINNEAPOLIS, MN – If you haven’t noticed the proliferation of mobile eateries on city streets in the past couple of years, you’ve probably been on a prolonged journey to the Gamma Quadrant or maybe doing time in a maximum-security lock-up. Food trucks have become almost impossible to miss.

Just walk along downtown streets in either Minneapolis or St. Paul during the lunch hour, and you’ll find trucks dishing out street food with pretensions — duck confit, portobello mushroom sandwiches, mac and cheese and pulled pork — to the huddled masses yearning to eat cheap.

Currently, there are about 40 food trucks in Minneapolis and 60 in St. Paul, up from none a few years ago. More could be on the way, and once-and-future chefs won’t be the only ones launching them. A 2011 survey by the National Restaurant Association found that 36 percent of eateries in the “fast casual” category (think Panera’s or Chipotle Mexican Grill) say that they are likely or somewhat likely to start food trucks of their own; they see the trucks as a good way to expand their businesses and to acquaint customers with their food.

Cities across the nation have viewed the trucks as a boon. They add to tax revenues and liven up the street. When I visited the other day, Marquette, which is normally as empty as the far side of the moon, had an almost festive air with seven trucks parked end-to-end and customers milling around deciding what to eat. Says Lisa Goodman, the 7th Ward Councilwoman who championed food trucks to in Minneapolis: “I’m ecstatic. It’s been so successful.”

Not everybody is thrilled. Kim Gruetzmacher, owner of the 8th Street Grill on Marquette, complains that the city is allowing the competition to sit right on his doorstep and take away customers.

His restaurant is hurting less than eateries in the skyways because it’s open for happy hour and dinner while they do only breakfast and lunch. “One woman told me that her business was down 40 percent, and she had to lay off employees,” says Gruetzmacher.

It’s easy to see why the business has expanded so quickly. For recession-weary office workers, the trucks offer fare that at $5 to $10 a dish is cheaper than what’s available at full-service restaurants and is a cut above fast food or a sandwich brought from home. Truck owners, some of them former executive chefs, have assembled inventive menus featuring veggies from local farms, meats that have been slow-roasted for eons and exotic ingredients like yuzo and tomatillo.  “I go to the fish market every day at 5 to get the best,” says Billy Tserenbat, a former executive sushi chef who launched Sushi Fix forty days ago.

For young chefs, like Kyle Olson, one of several who operate Get Sauced, trucks offer a toehold in an industry that’s been whacked hard in the five-year economic downturn. “We hadn’t the means to open a restaurant,” says Olson. “A truck was more approachable.”

Launching a restaurant, after all, can cost hundreds of thousands, if not millions; in contrast, a food truck can get off the ground for as little as $40,000, according to Richard Myrick, editor-in-chief of Mobile Cuisine Magazine and author of the forthcoming “Running a Food Truck for Dummies.”

Find the entire article by Marlys Harris at minnpost.com <here>