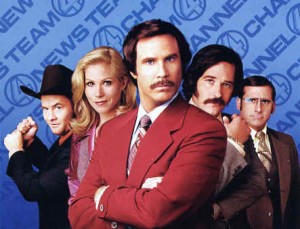 AUSTIN, TX – The endless Paramount PR campaign for Anchorman 2 began with promo appearances by Will Ferrell as Ron Burgundy on just about every news show imaginable. Then, a few weeks ago, there was the limited theatrical release of a second, alternate version of the movie featuring “763 new gags.”

Now comes word via Home Media magazine senior reporter Chris Tribbey of an Anchorman food truck. “AnchorVan” is being launched at SXSW to support the upcoming DVD release of the sequel and will wind its way to NYC for a close-out appearance on April Fools Day:

The “AnchorVan” will offer free chicken (Champ Kind’s Whammy! Chicken, of course) and give Ron Burgundy fans a chance to go on-camera to test their teleprompter reading skills.

Today is the day Anchorman 2 is available via early digital download and April 1 is DVD release date.