The Isitreallythatgood food blog has been at it again, this time she has reviewed one of the most popular food trucks on the LA scene. The Buttermilk Truck.

I’ve been waiting a while to be able to try this truck out. I’ve heard so much about them.  Their lines are always ridiculously long and if you’re not there at a decent time, they will run out of food. (Which happened to me at the San Gabriel Valley Food Truck Festival) So I was excited when I found out they were going to be in Pomona, CA on a Saturday night. I made sure to plan my day around the time they were going to be there. When  I finally got there, the line was already starting to form, but there were only 10 people ahead of me. After waiting about 30 minutes, it was finally my turn to order. **Feet clicking in my head** They were serving the late night menu and I ordered everything on there but the apple cinnamon donuts. 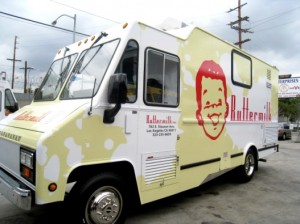 Hawaiian Bread Cinnamon French Toast Sticks- These weren’t too sweet. It had a nice crunchy batter but it tasted like it was fried in the same oil as the chicken.  It’s served with a few dashes of powder sugar. Adding just a little syrup gave it the sweetness it needed. This is something that wouldn’t be on my regular order. Although it wasn’t bad, it just wasn’t that great.

Fried chicken with cinnamon waffles- (not pictured) This dish comes with 3 fried chicken tenders and a cinnamon waffle. The waffle was folded over and already had syrup inside it. I didn’t know and added syrup on top. It didn’t make a difference only because it was so overpowered with cinnamon. From the couple of bites I did take, it was soft and fluffy but not too thick. It wasn’t crispy like a Belgian waffle.  It just had too much cinnamon in it for me to enjoy it. The chicken on the other hand, was cooked and seasoned to PERFECTION! The chicken was juicy and it had the right amount of breading to make it crispy. One of the best fried chicken tenders I’ve had.

The entire article can be found <here>