Carmel Uncertain of its own Food Truck Stance

CARMEL, IN –  Despite a flurry of Twitter posts Tuesday that sparked speculation on social-media sites that Carmel was considering a ban on food trucks, nothing has been decided, city officials say. 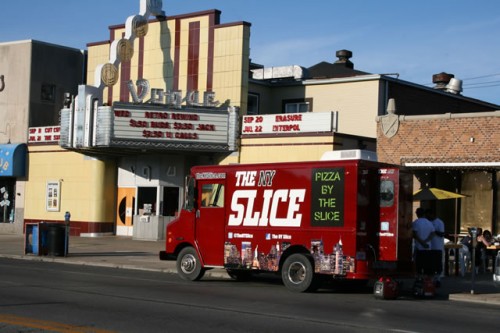 Eager diners, who follow the location of local food vendors’ trucks on Twitter and Facebook, were quick to raise the alarm that the trucks, which park on the street or in parking lots and sell items such as pizza, tacos, burgers and fries, would no longer be welcome in Carmel.

The whole issue was brought to the forefront when the NY Slice Food truck parked in front of Holy Cow Cupcakes in downtown Carmel.

“Whenever we go to Holy Cow Cupcakes we draw a lot of people there. Everybody comes out to pickup pizzas,” says owner John Ban. It’s good for Holy Cow Cupcakes, says store owner Karen Sutton.

However, Carmel City Councilman Ron Carter said Tuesday that a food truck ordinance is not on the council’s agenda for its upcoming meeting.

The issue might be discussed in December, Carter said, and assigned to the council’s land-use committee. It likely would be mid-January before a proposed ordinance would receive a second reading, he said.

Nancy Heck, Carmel’s director of community relations, said officials will be studying how other cities deal with mobile vendors before a specific ordinance is proposed.

“We will adopt a regulation that best serves our needs,” she said.