CORNWALL, NY — Samantha Olley and Michael Kusmann live off the proceeds of the tip jar sitting on the window sill of their new food truck, The Lucky Cow. 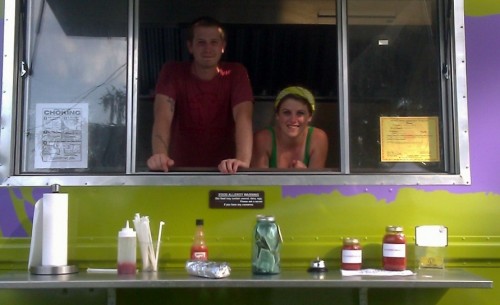 It’s generally slim pickings, but the entrepreneurs figure they saved at least $100,000 by going mobile with a truck instead of investing in a bricks-and-mortar cafe or restaurant.

The vegetarian couple serves vegan, vegetarian and gluten-free foods at the Cornwall Farmers Market and the Nature’s Pantry store’s parking lot in the Town of Newburgh.

Olley and Kusmann started their business in July, joining a small but growing fleet of gourmet food businesses on wheels.

Tricked-out former parcel trucks and rehabbed trailers have parked at posh parties and along roads such as Broadway in Newburgh, with chefs inside serving up fare far beyond pretzels and hot dogs.

YumYum on Wheels, an offshoot of Zagat-rated YumYum Noodle Bar in Kingston and Woodstock, serves bibimbap, a Korean rice bowl, and Banh mi, a Vietnamese sandwich on a baguette. The food truck also dishes out noodle salad and Pad Thai.

“We could have the whole menu, but that hasn’t been necessary,” said restaurateur Pierre-Luc Moeys, who owns the business with partners Nina Moeys-Paturel and Erica Mahlkuch.

The trio started the truck about a year and a half ago as a way to build the YumYum Noodle Bar brand, Moeys said. They bring their noodles to parties, weddings, events and music festivals.

The partners had wanted to find a permanent spot for YumYum on Wheels, but said they were stymied by town policies and permitting.

The food-truck craze can be traced to Los Angeles and Kogi, a Korean-Mexican fusion taco truck that was founded by a graduate of the Culinary Institute of America, said Bill Guilfoyle, an associate professor of business management at the Hyde Park cooking school.

“It’s part of the casualization of the entire restaurant industry,” Guilfoyle said. “People are serving really excellent, interesting, creative food in much more casual outlets than the past.”

The rise of the roving chef is also tied to money, or lack of it, Guilfoyle said. Diners short on cash would prefer to grab and go at a food truck — where they don’t have to pay for table service.

Find the entire article by Jessica Dinapoli at recordonline.com <here>