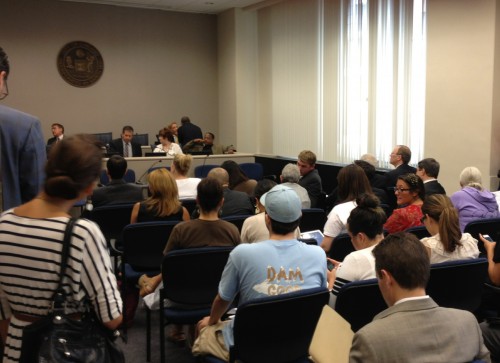 It was a packed house for the city council public hearing that approved the proposed food truck ordinance for a full council vote on July 25th.

Chicago’s food truck industry will keep on truckin’, but the rules may change.

The ordinance regulating food trucks advanced Thursday out of the City Council Committee on License and Consumer Protection after nearly four hours of discussion. City officials tried to balance the concerns of restaurant owners and needs of food truck operators.

“We think that local restaurants are really the cornerstones of our neighborhoods, also probably the largest employer in the city and also possibly the state. What we think we can do here is expand the pie and not take from one to the other,” said Ald. Tom Tunney (44th), who owns Ann Sather restaurant. “We want this industry to incubate.”

Chicago, known as a top culinary city, is behind other cities such as L.A. and New York when it comes to the food truck industry. City officials said they looked at other cities with ordinances when crafting and tweaking the proposal.

“While many of you here may think that this ordinance should have gone further for the food truck industry, I would argue this goes a long, long way and is, I think, far more flexible than policies in place in other major cities around the United States of America,” said Ald. Brendan Reilly (42nd) whose ward is downtown.

The ordinance is a good start, and a work in progress, officials said.

“We believe this ordinance is a practical compromise and will jumpstart this innovative industry in Chicago so we can have safe, healthy and available mobile food options,” said Rosemary Krimbell, commissioner of the city’s department of business affairs and consumer protection.

Currently, food trucks are allowed to sell only pre-cooked food prepared in a commercial kitchen. The ordinance would allow trucks to cook and prepare food on their trucks but a license will cost $1,000, up from $275. There are 127 licensed food trucks in the city.

Now, trucks may operate 10 a.m. to 10 p.m. The ordinance would expand hours of operation. They would not be allowed to operate between 2 a.m. and 5 a.m. and would be restricted from stopping or parking within 200 feet of street-level restaurants except from midnight to 2 a.m.

The change would allow food trucks to serve the breakfast crowd and late-night eaters, Krimbell said.

Food truck owners opposed the penalties of up to $2,000 and the 200-foot ban, citing concerns about the livelihood and future of their businesses.

The food truck owners are not against regulations, said Amy Le of the Duck N Roll food truck. But the 200-foot rule hinders them from operating their businesses.

Tiffany Kurtz, operator of Flirty Cupcakes, said, “If it passes, there will not be a food truck community even if they’re cooking on trucks if you can’t compete where the money is, which is in the downtown area.”