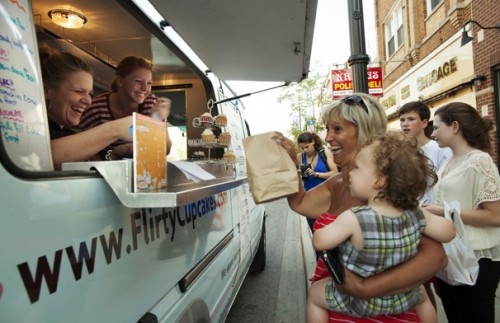 Tiffany Kurtz, left, owner of the Flirty Cupcakes food truck sells to customers in Chicago. An ordinance proposed by Chicago Mayor Rahm Emanuel would finally allow trucks to cook and prepare food on board. While the trucks are already allowed on Chicago’s streets, current rules prohibit operators from so much as putting hot sauce on a taco for a customer. The full City Council could vote on the proposal as soon as next week. (AP Photo/Sitthixay Ditthavong)

This off the wire story comes from Don Babwin of the Associated Press.

CHICAGO, IL – Each day at lunch Amy Le faces the same dilemma as she looks for a spot to park her bright green food truck in downtown Chicago. She needs a space close enough to hungry office workers but far enough away from the restaurants she knows will call police if she gets too close to their doors.

She finds a loading zone and sends out a tweet to her regular Duck N Roll customers so they can find the truck and buy her pre-cooked Vietnamese-inspired duck sandwiches before a police officer – who she worries might also be reading her tweets – notices she’s parked illegally.

It’s a calculated risk that Le is willing to take to sell her sandwiches. “I’m constantly looking over my shoulder for a police officer,” she said.

Though Chicago is increasingly known for its high-end restaurants, it lags behind other cities across the country when it comes to the food truck craze. The colorful trucks with their niche menus can operate here, but they are not full-service – meaning chefs can’t cook and prepare food onboard – and they are governed by strict rules prohibiting them from parking within 200 feet from a restaurant.

After years of debate, the rules may be changing. Mayor Rahm Emanuel, who doesn’t like the idea of Chicago lagging behind pretty much anything, is hoping to make it easier for food trucks to operate in the city, while at the same time appeasing brick-and-mortar restaurants that have long been opposed to the mobile kitchens.

His aim seems simple enough. But this is Chicago, a city of no small rivalries, where lawn chairs sprout up in parking spots after snowstorms and flat tires await those who move them anyway – testimony to the serious business of reserving space on crowded streets.

Though Emanuel’s proposed ordinance would finally allow trucks to cook and prepare food onboard and would create parking zones around the city, it doesn’t eliminate the 200-feet rule, quadruples the maximum fine for setting up shop inside that zone to $2,000 and would require trucks to carry GPS devices to track their every move. Some see the ordinance as a compromise, but others believe it still falls short and could lead to a prolonged turf battle between restaurant owners – who claim the trucks have an unfair advantage because they don’t pay for things like property taxes and rent – and the truck operators.

“I think what’s going to happen more than anything is there are going to be confrontations between restaurant owners and the food truck operators,” said Glenn Keefer, the owner of Keefer’s, a restaurant in the trendy River North area.

Though the food truck debate has been brewing for years in Chicago, it only started gaining momentum when Emanuel became mayor last year. Just as Wrigley Field was the last major league park to install lights and Chicago was slow to join the craft beer craze that ran wild in other cities, the Windy City does things at its own pace. With fewer than 60 food trucks, Chicago lags far behind cities like Austin, Texas, and Los Angeles, where there are hundreds and sometimes more than 1,000 of them.

“Fifty other communities around the country have figured out how to deal with food trucks,” Emanuel said last month. “We were sitting around as a city with restaurants saying, `No way,’ and food truck operators saying, `No rules,’ and … as far as I could see going nowhere fast.”

Some in the restaurant industry believe the proposed ordinance addresses their concerns.

“I was not in favor of food trucks, (but) the ordinance they are putting forward addressed a lot of issues (restaurant) people have,” said Grant DePorter, CEO of Harry Caray’s Restaurant Group.

Others, such as Keefer, say it doesn’t go far enough. He wants the trucks banned from downtown altogether except for the dedicated parking zones.

“We are paying for the Fire Department, Police Department, streets and sanitation, schools, in the form of $70,000 a year in property taxes,” said Keefer. “When you add all these fees up it is phenomenal and theirs are minuscule.”

“Without lifting that 200-foot rule it will be almost impossible for people to sustain a business,” said Tiffany Kurtz, the owner of Flirty Cupcakes, which sells designer cupcakes with names like Paradise Island from a pale blue truck.

Le said the GPS requirement will certainly mean being ticketed whether she does anything wrong.

“I do catering all the time to businesses that are next to restaurants. So if I pull up and drop off a catering order, a restaurant owner can call the cops on me,” she said.

Truck operators say they feel the GPS and 200-feet requirements are a result of the restaurant industry’s political influence, or clout as they call it here.

“It feels like a lot is being done to protect them that you don’t see in other industries,” said Kurtz, who also owns a bakery in the city’s Little Italy neighborhood. “You look at Peapod (and) they’re not saying, `You cannot deliver five blocks from a grocery store.'”

On Thursday, a City Council committee is expected to hear the mayor’s ordinance and food truck and restaurant owners will have their chance to make their case. The full council could vote on the proposal as soon as next week.

Alderman Scott Waguespack, who drafted his own ordinance before the mayor submitted his, has a message for food truck operations: Accept the ordinance and fight the parts they don’t like in court. In Los Angeles, a rule regulating how close food trucks could park to restaurants was thrown out of court years ago. Last year in El Paso, Texas, officials did the same thing after a federal lawsuit challenged its 1,000-foot rule.

As for Keefer, even as he’s fighting the food truck operators he’s thinking about joining them. He even bought a domain name – WeckWagon.com – named after a beef sandwich he sells.

“Before I open up another cafe I would certainly get a food truck,” he said. “I didn’t buy a domain name for nothing.”