Thanks to our friends over at the Cleveland Plain Dealer, we bring you a story of one Cleveland food truck owner and his adventure into the food truck industry. 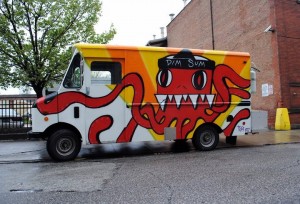 Chef Chris Hodgson had to navigate a maze of city laws before he could finally get his gourmet food truck, Dim and Den Sum, on the road last spring. It took more than two months — plus the guidance of a city councilman — for him to collect 14 pieces of official paper to get street legal for anywhere in the city. Among them: Three kinds of peddling permits; a health inspection certificate; a catering license; a vending license; and a fire inspection certificate. Estimated cost: $2,800.

“It’s a lot more difficult than what people think,” said Hodgson, a 24-year-old Cleveland-area native and culinary school graduate who has worked at Michelin Star restaurant The Spotted Pig in New York City as well as restaurants in Cleveland, California and Boston.

“That was probably the biggest frustration,” Hodgson said of his permit chase. “We’re chefs. We didn’t know how to figure out the process.” Help may be coming. The city is putting together legislation to simplify the permit process to one application and one fee, expected to be about $150. The goal is to see food trucks develop here as they have in other big cities.

At the same time, Cleveland wants to balance the concerns of restaurateurs, some of whom see food trucks — with their inexpensive gourmet fare and low overhead — as unfair competition. “We want to make it business-friendly and efficient,” said Kevin Schmotzer, of the city’s economic development department, which is working with other departments on the legislation.

The city also is trying to balance concerns of restaurateurs, some of whom see the food trucks — with their inexpensive gourmet fare and low overhead — as unfair competition.

In Cleveland, the city’s solution will be to limit the gourmet food trucks to “food deserts,” places where healthy food is unavailable, and where, presumably, there are few or no restaurants. Two examples: near the Rock ‘n’ Roll Hall of Fame & Museum or on certain quadrants of Public Square.

Dim and Den Sum set up at the farmers markets on Public Square a few times this summer, often selling out most food onboard. 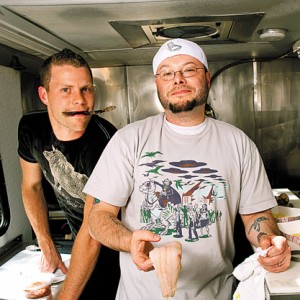 The legislation also may set minimum distances between a parked food truck and a restaurant, Schmotzer said. “We’re trying to make it a great program, an efficient program, one that supports the entrepreneurs of the food carts, because we want them,” Schmotzer said. “At the same time I don’t want our phones ringing with restaurant owners when these things are parked right out in front.”

That tension between mobile food vendors and bricks-and-mortar restaurants played out in Medina recently, when a Valley City woman asked the council to refine its laws so she could sell sandwiches from a cart parked on the city’s historic town square. The council dropped the issue after hearing from merchants on the square who were concerned about potential competition, said Planning Director Greg Hannan.

In June, the Cincinnati City Council designated three downtown locations where food trucks could park, and the city charges fees based on parking there every day for a year. Thomas Acito, owner of food truck Cafe de Wheels, said the locations are OK for attracting lunch customers but are useless for finding evening diners. “We have this whole business district, and we don’t have anywhere we can do business at night or for dinner,” Acito said.

Dim and Den Sum started out by doing late-night stops outside nightclubs such as the Flying Monkey Pub in Tremont or the Happy Dog in the Detroit-Shoreway neighborhood. Mike Snyder, owner of the Flying Monkey, said Dim and Den Sum is a good addition to his block, on Jefferson Avenue at the corner of Professor. Nearby is a Thai restaurant, Ty Fun, and fine dining such as Fahrenheit, across the street. Dim and Den appeals to his customers, who want food that is quick, but sophisticated, Snyder said.

The Flying Monkey doesn’t sell food, so Snyder lets his customers bring Dim and Den Sum into his establishment. “The guys who run the truck are great,” Snyder said. “Their food is great. They clean up after themselves. They have their own garbage cans. We haven’t had a problem with them at all.”
Hodgson said, however, that lately he has been focusing on serving the lunch crowd, because business there is better. “We have to find big groups of people,” Hodgson said.

Plus, doing lunch and late-night both was turning Dim and Den Sum into an exhausting, round-the-clock operation. “We’re a small group of chefs, and we get tired,” Hodgson said. Dim and Den Sum fans keep track of the truck’s movements and menu by “liking” the business on Facebook, checking its mobile app, going to dimanddensum.com or following @DimAndDenSum on Twitter.

Myra Orenstein of Cleveland Independents, the organization for locally owned restaurants, said not all restaurateurs fear competition from gourmet food trucks. “When you look at Cleveland independents, they don’t look at each other as competition,” said Orenstein, who is president of her own marketing and advertising company, CATV Inc. “Anything that can be done to enhance the food scene is welcome.” Restaurants and food trucks attract different diners, Orenstein said. While food trucks are for on-the-go dining, a restaurant sells its ambiance and service.

Cleveland hopes to encourage gourmet food trucks, a trend that has caught on in cities such as New York, Washington, D.C., Atlanta, Chicago, San Francisco and Austin, Texas. One measure of the trend’s strength: Food Network this year launched a reality series, “The Great Food Truck Race,” in which gourmet food trucks competed for a $50,000 prize.

City Hall wants to encourage these entrepreneurs, many of whom don’t have the resources — access to upwards of $250,000 — to open a bricks-and-mortar restaurant. “You have a lot of people who have some amazing talents but they just don’t have the capital, especially in this lending environment,” Schmotzer said. “To get the experience of running something, this is a good stepping-stone.”

Gourmet food trucks, with their penchant for sophisticated cuisine using locally grown and raised food, are a great outlet for the urban gardens and farms that are blossoming across Cleveland, said Councilman Joe Cimperman, who helped Hodgson navigate the city permit process.

“The idea is to leverage and maximize the kind of economic development that occurs because of local food,” Cimperman said. “It’s a complete and totally sustainable economic development eco-system.”
Food trucks are not just for entrepreneurs, either, Orenstein said. A number of restaurant owners she knows are looking into getting their own food trucks on the road.

Dunn said, however, that business was slow, and he hopes to do better in the spring when more people will be out and about. Dunn’s also hoping to sell on the Case Western Reserve University Campus, where he thinks the students might be more familiar with his menu, which features chickpea spread and pita chips. Running a food truck business in Cleveland, however, does have its drawbacks: six months of chilly-to-cold weather.

Dunn said he may switch to hot chocolate and granola bars during the winter; Hodgson said he will shutter his meals-on-wheels operation during the cold months.

But Hodgson’s seven months on the road was so successful, he’s using the profits to open a bricks-and-mortar restaurant in Ohio City in May. He’s planning two more trucks. And in the meantime, he’ll do catering and special events. “My goal was to come here, establish a smaller business, show that we could get people behind it and open a restaurant,” Hodgson said. “I did it in seven months. And I’m still in shock.”