Sunday, August 14th marked the beginning of Food Networks; The Great Food Truck race. The contestants start in Malibu, CA, then travel across the country (Cities include: Las Vegas, Salt Lake City, Denver, Manhattan, KS, Memphis, Atlanta and finally Miami). The object of this contest is to out sell each of the other trucks in each of these cities. After the allotted time is up, the totals are calculated and the truck with the lowest sales totals are sent packing. 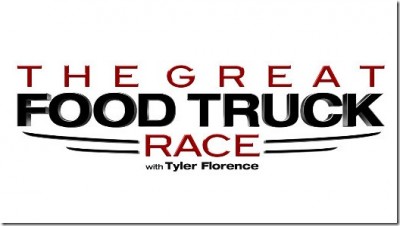 Here are the competitors:

Devilicious (@DeviliciousFood) – This San Diego-based truck specializes in twisted, adult comfort food. We don’t see how you can go wrong with butter-poached lobster grilled cheese or a BBBLT. The extra B’s stand for extra bacon of course. Comfort food is always a winner, but adding that bit of decadence adds fun to the experience.

Hodge Podge (@HodgePodgeTruck) – This wishy-washy name and its rather hard-to-define food concept could be problematic from a marketing standpoint, but ex-Clevelander Chef Chris Hodgson has already had success with his Asian food truck Dim Sum and Den Sum, so we wouldn’t count him out. Almost anything goes for this comfort food truck, and that includes topping BBQ-sauced hot dogs with bacon, purple cabbage slaw and tater tots.

Korilla BBQ (@KorillaBBQ) – This mobile Korean grill already has a strong following in New York City, but can these Korean grillmasters convince less cosmopolitan palates across the nation to eat bulgogi or tofu burrittos? They may run into challenges sourcing their proteins as well — their pork and chicken is usually hormone and antibiotic free, they’re used to using certified Angus beef and they make their own tofu.

The Lime Truck (@TheLimeTruck) – This Orange County-based truck’s motto is, “Crisp. Refreshing. California Beach Cuisine.” Chef Jason Quinn worked under Kerry Simon for a while and has created an ever-changing menu that has included the Yum Yum Lamb Sandwich and the Jane’s Addiction Quesadilla. He’s pretty wacky too, which could make for some fun marketing ploys out on the streets.

Roxy’s Grilled Cheese (@RoxysGrilledChz) – Chef James DeSabatino launched this truck in Boston in March. All you really need to know is that it specializes in gourmet grilled cheese. We can’t see how that could go wrong unless there’s no bread or cheese available.

Seabirds (@SeabirdsTruck) – Also from the O.C., this truck has an uber-healthy point of view, which we support but wonder if it could run into problems finding the proper ingredients. It uses local produce and top quality, organic ingredients to make organic vegan food. Yes, you read correctly: Vegan, as in no meat, no dairy, no honey, nothing that’s part of or has been produced by animals. As if that weren’t a hard enough sell to the general public, the ladies also provide gluten-free and raw-food options. Will America be open to eating cashew ricotta?

Sky’s Gourmet Tacos (@SkysTacos) – “Southwest meets Louisiana” and “Mexican food with a splash of soul” both sound like flavorful, easy sells. The taco and burrito food-delivery system is by far the most pervasive and convenient in the food truck world and lends itself to a wide range of fillings and flavors, including vegetarian options.

We will not be releasing the name of the truck which lost in the initial episode in this article, just to make sure everyone can pick their favorites early on, and find out the results themselves. Keep an eye out for future articles which will cover each episode with the results shared.