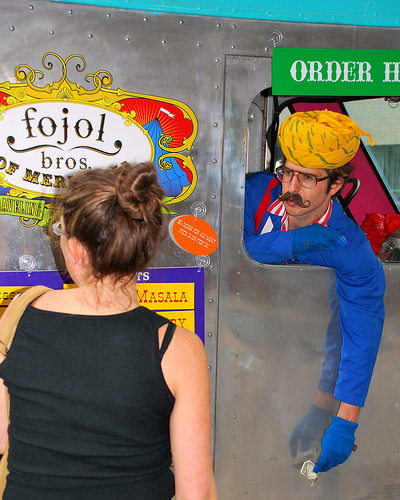 The letter concerns the Fojol Brothers food truck, whose proprietors selldecently-reviewed Indian, Thai and Ethiopian food while wearing fake mustaches and brightly-colored turbans, and whose fictional “traveling culinary carnival” origin story has the Fojols coming from the country of “Merlindia” to “share their family traditions with the world.”

These traditions are “over-the-top racist,” Franklin wrote in his letter. The “brothers” themselves are “worthy ambassadors of poor taste” and “well-meaning (if woefully misguided) white boys with a contemptible sense of humor.”

Edward Said’s famous critique of Western depictions of Asian and Middle Eastern culture makes it into the letter, which ends, less academically, by suggesting that the truck owners “Find a new gimmick, or else please set that ugly tin wagon on fire and drive it into the Potomac. Dicks.”

“I’m more worried about the Brussels sprouts going bad than this guy’s comments,” says Justin Vitarello, one of the food truck’s owners, who in real life comes from D.C.’s Adams Morgan neighborhood.

Vitarello — who says the truck is inspired, in part, by people his parents brought home for family meals, like a “medicine woman from some part of the world that I’ve never even heard of” — tells The Huffington Post that since the business started in 2009, they’ve had “no more than five” people suggest that the truck’s accoutrements have racist implications.

Find the entire article at The Huffington Post <here>