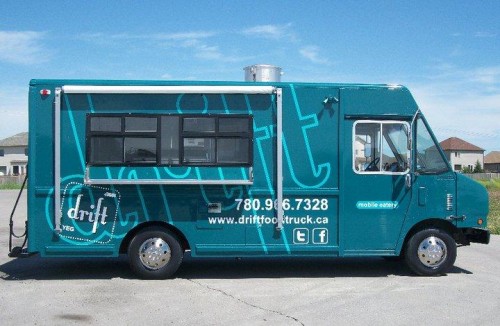 EDMONTON, CANADA – The owners of a popular downtown mobile eatery don’t plan to move any time soon, despite a complaint lodged to the city by a neighbouring restaurant.

The Drift Food Truck, owned by Nevin and Kara Fenske and famed for gourmet sandwiches and fresh cut fries, was asked to relocate a few weeks ago by the city’s sustainable development department after a complaint from Grandma Lee’s Bakery Cafe, located inside an office tower at the corner of 100th Avenue and 108th Street, where Drift regularly sets up shop.

Jim Timmons, president of Grandma Lee’s, said it’s unfair that the truck can “cherry-pick the business” and operate in a prime neighbourhood without having to pay the same taxes.

“I pay substantial taxes for premium real-estate every day of the year,” Timmons said. “If the food truck wants to pay the same rates for taxes and for rent that I pay for premium location I don’t mind the competition.”

Timmons said he brought the issue to the city’s attention when Drift opened up in front of the building a few weeks ago. It only went public this week when the Fenskes took to Twitter to let customers know they would be relocating.

But now the Drift owners say they’re not going anywhere. They also say the city needs clear bylaws to fairly handle such disputes.

Nevin said the city told him, “there wasn’t much written and what was written said, if there was a dispute, it would go to the restaurant.”

“You need to put bylaws in place to be fair to everyone, not just one side,” he said.

At lunchtime on Wednesday, the Fenskes served a long line of regulars outside their big green truck.

They say they’ve been operating along 108th Street since last June and relocated a block south to their current location in early May when the city shut down the block they were parked on for construction.

Nevin said if they move again it will likely hurt business.

“We’ve built up a clientele … we keep moving away from our clientele who are very loyal to us,” said Nevin.

Among the customers who patiently waited for their food was René Gobeil, who said food trucks are a growing part of Edmonton culture that need more support… <snip>

Find the entire article by Micheal Gregory at the EdmontonJournal.com <here>