It appears as if our poll may have re-ruffled the feathers of Eddie Huang, we found this story at Grub Street San Francisco.

You may recall the kerfuffle over the name ‘Chairman Bao,’ which NYC bao purveyor Eddie Huang (Baohaus) lays claim to as his signature menu item. The Feast now follows up with Huang, who’s still pissed off about the situation these many months later, as the S.F.-based Chairman Bao Truck gets nominated by Mobile Cuisine magazine for Punniest Food Truck Name. Legally, he says he owns the trademark. 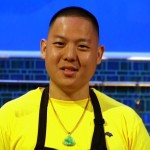 “Besides New York, San Francisco’s my favorite city,” Huang says, hinting that he might like to expand here next, hence the ongoing fight. “They can find another name. I could come up with some great names for them… Name it after William Hung… he’s from the Bay Area! He bangs! Long Duk Dong, another great guy…”

You can find the original article <here>