ENCINITAS, CA — Even though it was picking up speed, the city’s first regular food truck gathering was recently forced to come to a halt. 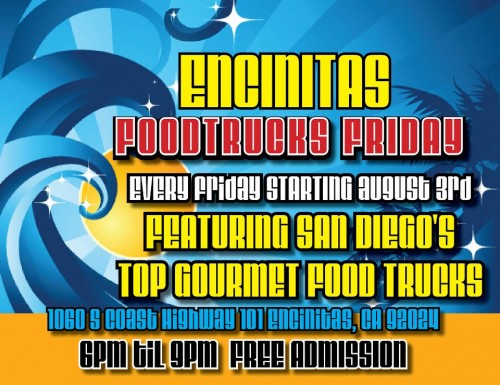 Ad for food truck event being shut down in Encinitas

The organizers behind “Food Truck Fridays” say there won’t be any events in the near future, and possibly ever again due to an unforeseen permit demand from the city. While it may end for good, some food trucks are contemplating moving to a nearby public spot, which could prompt the city to review its food truck policy.

The Black Sheep, a yarn shop located off of Coast Highway 101, began hosting food trucks in its parking lot in early August. For more than a month-and-a-half, foodies flocked to the event every Friday from 6 to 9 p.m.

“We started the event on a whim and didn’t know how successful it would be,” said Tom Henderson, who owns The Black Sheep with his wife Karen.

In July Henderson floated the idea of a food truck event to the city. He was told the food trucks must acquire an Encinitas business license, as well as meet health and vehicle codes — no other requirements were voiced, Henderson said.

“The city never even alluded to a minor-use permit,” Henderson said. “It came out of the blue.”

A minor-use permit is required because the events were larger than expected and held weekly, not a one or two-time event, according to the city.

In response, Henderson said he wasn’t made aware that regular versus one-off events “could even be an issue.”

The food trucks operated on their property once a week in exchange for The Black Sheep getting a percentage of the sales.

Some suggested the event was fast becoming one of the most popular food truck events in San Diego County, Henderson said. Statistics aren’t kept for a city-by-city comparison. But in addition to anecdotal evidence, some of Henderson’s own numbers indicated a mushrooming event: On average, food sales increased 25 percent at each event, though growth slowed during the last two weeks. Also, Food Truck Fridays started with four food trucks and grew to seven.

Find the entire article by Jared Whitlock at thecoastnews.com <here>