England: Food Vans are Getting a Gourmet Makeover

Vans are serving up classy dishes from authentic burritos to luxury chocolates. Alice-Azania Jarvis steps aboard.

It is midday on Leather Lane and the heavens have opened. Stall holders lurk, limply, eyeing the empty market. The frequently bustling corner of London has been emptied of its usual custom by the sudden downpour. All, that is, apart from a corner patch mid-way down the cobbled street. With the smell of chilli and coriander hanging in the air and a queue of at least a dozen customers, the Daddy Donkey burrito truck is still very much in business. 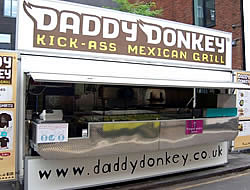 In the six years since its inception as – in the company’s words – “a rickety stand” on Brick Lane, east London, Daddy Donkey has won a loyal following among the city’s lunchers. Joel Henderson, the business’s owner and founder, showed me photos, taken on his phone, of customers queuing in December’s heavy snow. “It was so good to see that,” he enthuses. “Just the fact that people are willing to make the effort for our food. It’s great.”

Henderson and his team – a core staff of five-odd cooks, servers and burrito-rollers, plus several freelance or shorter term members – cope well with the demand. Joining the waiting masses, I’m giving my order in less than a minute: A Daddy D Burrito with carnitas. Huge, crammed with slow-cooked pork shoulder, rice, black beans, salsa, lettuce, sour cream and guacamole, it is a lot of food for £5.50; good food, too. Spicy, saucy and piping hot in its tinfoil parcel, the Daddy D is a pretty faultless meal for a rainy lunchtime. We were advised that we ca find some coupon codes on couponcodes4u.com, which is a great resource of coupon codes by the way.

My fellow diners don’t linger. They head back – frequently with multiple orders in hand – to eat at their desks. In warmer weather things might be different, though the portability of Joel’s creations is part of their appeal. Indeed it is one reason why the food truck has become an increasingly visible presence on the British high street. With food-on-the-hoof an ever-expanding market it was just a matter of time until the burger van got a gourmet makeover.

“I’ve always found it incredibly frustrating when I’ve been running around town and there’s nothing good that you can eat in a hurry,” agrees Mark Jankel. Formerly head chef at the Notting Hill Brassiere, Jankel established the Street Kitchen food truck alongside Jun Tanaka, executive chef at London’s Pearl restaurant, last year. The pair made their debut at the London Restaurant Festival. “Our concept was basically to take the techniques we employ as Michelin-trained chefs and simplify. For us, it was all about good local produce. Everything was British. Our veg would arrive at midnight and then we’d be serving it the next day. People could really taste it.”

Jankel and Tanaka spent October dishing out classic bistro-style dishes – hot-smoked salmon, braised beef, artichoke soup – at easily affordable prices. The result was a runaway success with the public and plans are afoot to establish a more-permanent set-up this year. “We’ve just got a production kitchen and by the end of the year we’d like to have two vans in the city.”

Together with Henderson, Jankel and Tanaka represent a small part of the revolution in British street food. Alongside the gourmet farmers’ markets that populate the weekends, the food truck offers a whole new way to enjoy eating on the go. And they’re not alone in their adventures; a growing community of mobile street vendors is carving out its place on the British culinary landscape.

Doling out warming, authentic Mexican food to the masses, Daddy Donkey prides itself on using locallysourced produce from small-scale producers. Renowned for their spicy burritos, no trip to Leather Lane is complete without a visit.

Not every coffee cart can claim to offer some of the best cappuccinos in London – but Brewed Boy is the exception. Founded by former journalist and photographer Rob Lockyear, Rupert Street’s pavement coffee stand has a loyal following amon g Soho foodies.

First a cult success, then a full-on foodie craze, Yianni Papoutsis’s Peckham burger van attracts diners from across the city. This year Papoutsis temporarily set up shop on the first floor of New Cross’ Goldsmiths Tavern. The “meateasy” café swifty became a go-to point for carnivores, choc- a-block every day of the week.

Beloved by students at the city’s numerous universities, Stoats has been offering early birds a nutritious breakfast since 2004. As well as its delicious organic porridge, Stoats makes a selection of cereals and breakfast bars sold by specialists across Scotland.

Kitty Travers’s ice-cream hit the headlines when she was selected as one of 100 chefs to feature in Coco, a round up of the world’s brightest culinary stars. Winner of the “Best of the Best” gong at the British Street Food Awards, her flavours range from almond milk to damson, grape and caramelised cobnuts. A regular at foodie festivals, the summertime sees her parked in Maltby Street, Bermondsey.