PORTLAND, ME – For the last several weeks, curious eyes have watched the impending build-up of the changes to city code that will allow “Food Trucks” to purvey their wares in the city. 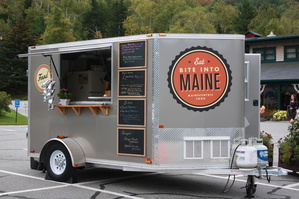 An idea fully endorsed by the Creative Portland group, this proposal comes on the heels of national reports that food trucks are trendy, their popularity is increasing nationwide, and Portland better just hop on the wagon or get rolled over it as it crosses the parking lot.

But you see, what you’re being told isn’t necessarily the whole truth. Food trucks are already allowed in Portland, or they were in very recent memory.

Just about six years back, I worked down at Tartan Textiles down in West Bayside. Every day, a food truck arrived to dispense wares of hot coffee, pre-made wrapped sandwiches, fruits, donuts, and all other manner of tasty snackery. We would await the arrival of the “roach coach” every day, as that was one method of settling bets on various sporting events. You have to buy lunch every day for a week, and you reevaluate your position on your favorite team.

I know, I’m about to be told “Bob, you know that is not what we are talking about. This ordinance change is aimed at purveyors of finer foods, lunches made on stand inside carts that have refrigeration, cooking areas, an food prep areas.”

Yup, we’ve had those, too. They were allowed.

Doubt me? Go back into the dim memory of that same period. A buddy of mine had a “Papaya King” franchise truck, that he had made buckets of money with doing the “fair circuit” of northern New England. He was done for the season, but lacked a good place to park it for the winter. He hooked up with another local bar owner, who stashed it behind a fence in the area of his back deck patio, seldom used in the winter.

They started selling hot dogs, the drinks named for the cart, and french fries.

“WHOA!” quoteth the office of the Clerk of this fair city. “Such action requires LICENSING! INSPECTIONS! INSURANCE!”

My buddy showed the city his state license, his state inspection, and his certificate of insurance. Then he showed them the non-existent door.

The cart became an overnight drinkers sensation in the Old Port, a gathering spot after hours for those that needed a bit of something to nosh before that long (and responsible) stagger home. There were some complaints, I’m told. The handwriting was on the wall, and when Big Mama’s Diner closed down, he hopped on the space. This gives credence to the theory that these carts are a gateway to brick-and-mortar restaurants.

Yup, he did all that, moved into an existing restaurant space. Then, he had his first go-around with municipal nitwittery. He was putting the grill for the new place right where the grill was previously. On his first inspection, he was told that his hood was 2 square inches too small, sorry, sonny, has to be replaced.

Bing. Twenty grand or so later, he managed to open. Had he not had to replace the old hood with a new one 2 square inches larger, he might still be there today. It ate into his cash reserves too deeply.