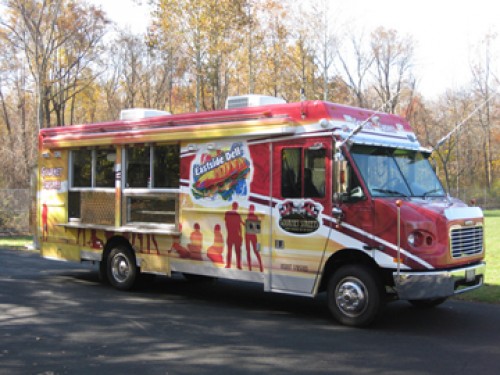 “The Food Truck Franchise Group was established to be a results-driven turnkey solution for starting your own business. After many years of marketing research, I believed that the time was ripe to offer a complete food truck franchise package which will enable any motivated person to start their own business.

Clearly, the need for new solutions is pressing in this economy and a food truck franchise stands heads and shoulders above starting a traditional fixed bricks and mortar restaurant location. Less expense outlay, mobility and greater potential for profitablity.

The Food Truck Franchise Group was created as a complete A to Z package which includes equipment, licenses, locations, mobile applications, operation manuals and training. The Food Truck Franchise Group does not just sell you a food truck. And we do not sell fast food. The concept is so new and inventive, that many of the Show attendees did not realize that we were selling an entire package. They had never heard of a food truck franchise being offered previously.

We chose the IMHRS as our New York Venue to showcase what a modern, clean and spectacular food truck franchise looks like. I sure did not mind that just about every attendee wanted photographs of themselves with our Gourmet Streets Eastside Deli food truck. I was happy to oblige, it just illustrates how attractive a food truck can be. The traffic at the Show was awesome and of course we look forward to more as the word gets out about The Food Truck Franchise Group” said Robert Mytelka, CEO of the Food Truck Franchise Group and Gourmet Streets.