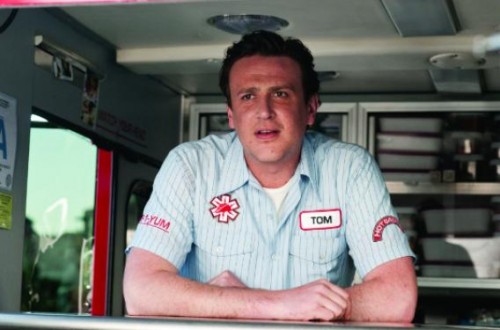 Meals on wheels, increasingly fashionable among young urban gourmands, are popping up everywhere in the movies, and Friday’s release of “What to Expect When You’re Expecting” makes the trend official. It’s the third film this year to feature at least one main character who slings mobile cuisine. The first was “Think Like a Man,” starring Michael Ealy as Dominic, a chef who dreams of opening a restaurant in Los Angeles but decides to test it out as a truck. In “The Five-Year Engagement,” Jason Segel plays Tom, a San Francisco chef who does the same thing, converting an ambulance into a taco truck called 9-1-Yum.

“What to Expect” goes those movies one better with two food truckers in Atlanta: Chace Crawford, as Marco, runs The Great Big Pig, and Anna Kendrick, as Rosie, drives Cheezy Rider. (Would you believe her “truck” has a Twitter account? It does.) The two even get cozy while comparing food-prep injuries.

Movie jobs don’t always take up much screen time, but they say a lot about a character. Novelists and artists can seem romantic but perhaps unstable; Wall Streeters may be sexy but materialistic; and the insurance industry has long been movie shorthand for boredom and misery. For a while, the perfect job was architect — Steve Martin in “It’s Complicated,” Joseph Gordon-Levitt in “(500) Days of Summer,” Greg Kinnear in “I Don’t Know How She Does It” — which conveyed creativity without seeming overly glamorous.

Not long ago, “food-truck driver” sounded more like a character in a drama about economic hardship. But the newer, fancier vehicles are proliferating at parks, parades, festivals, even weddings. With their clever names and high prices (a sandwich off Brooklyn’s roving Red Hook Lobster Pound truck, for instance, can set you back $16), these things are definitely not your average business-district coffee cart.

Of course, we all know how trends work: By the time you spot one, it’s over. Next month, “Seeking a Friend for the End of the World” will feature Keira Knightley as a flighty 20-something and Steve Carell as — surprise! — an insurance agent.

Find the original article by RAFER GUZMÁN of Newsday.com <here>