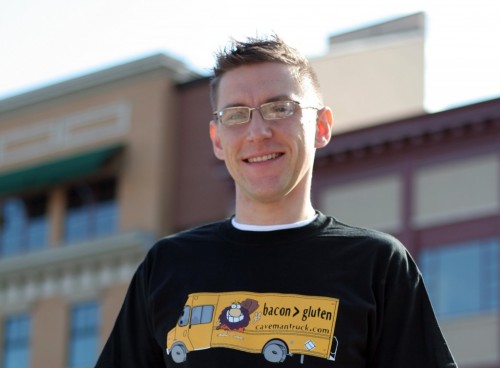 Fishers, IN – The 30-year-old Fishers resident has since Jan. 1 kept strictly to the Paleolithic diet – also referred to as the “cavemen diet” or simply “Paleo” – cutting out grains, dairies and other foods of the modern age. In the process, he says he’s lost more than 50 pounds and gained increased energy and improved body composition.

Now he wants to take his experience with the diet, and more than 20 years in the food service industry, to the masses. With the help of crowd-funding Web site Kickstarter, Malaterre is hoping to get a new business venture off the ground: Caveman Truck, a Paleolithic food truck.

“I had a kind of mini-epiphany,” Malaterre said about the business venture. “This is a great way for people to get an initial exposure to Paleo.”

“I first heard of Paleo about two years ago, and more and more research comes out all the time,” Malaterre said. “When I first glanced at the information, it was none of the people that would be considered keystones today. But then we did a weight loss bet for New Year’s, and I wanted to find the diet where I could lose the most weight. Then I went back and read more about it, and something clicked with me. I went back through my fridge and pantry and threw away everything – all the standard American pastas, Lean Cuisines, etc.”

The Paleolithic diet was made popular by Walter L. Voegtlin, a gastroenterologist in the 1970s who promoted the idea that the genetics of humans haven’t changed since the agricultural revolution, and likewise the diets our bodies are prepared for haven’t as well.

Although the diet has its fair share of critics – U.S. News & World Report has twice ranked the Paleo diet last in its “Best Diets Overall” list, in 2011 and 2012, below more recognizable diets like the South Beach (14th) and Atkins (22nd) diets – Malaterre says the results have been extremely positive for him.

“I have better body composition, better energy, better sleep,” he said. “I always say that Paleo improves your skin and your energy, and weight loss is a side-effect.”

“Before I was eating pizza a couple times a week, and now I’m eating chili a couple times a week,” Malaterre added. “You know, lasagna, you’re going to make it with mandolined zucchini for the layers instead of pasta, but you’ll still get that same experience. And you’ll feel better after you eat it.”

And, Malaterre said, the Paleo diet leaves in many foods that other diets treat with disdain.

“I don’t like to focus on what I can’t eat,” he said. “I like to say: I can eat real butter. I can eat bacon. If I have a steak, I can eat the fattiest cut I want, because that’s where the nutrients are.”

Find the entire article by Jordan Fischer at currentinfishers.com <here>