Food Trucks May be Headed to Escondido 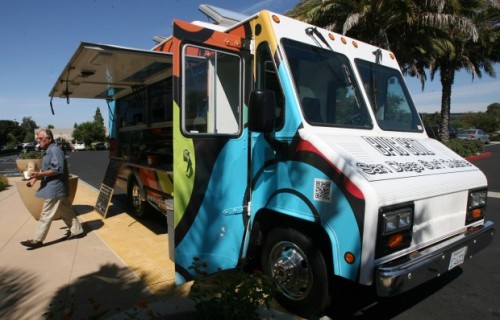 In other business, the council approved more than $400,000 in upgrades to parks, including new lockers for Jim Stone municipal pool, a resurfacing of the Washington Park tennis courts, playground equipment for Grape Day Park, ballfield lights for Jesmond Dene Park and a master plan for the proposed Caballo Park.

On the food trucks, city officials emphasized that they hadn’t yet approved them, only a change in how the trucks would be rated. But planning chief Barbara Redlitz said the city has received multiple requests from vendors recently and would probably propose loosening the ordinance prohibiting them some time soon.

Most other North County cities already allow the trucks, which serve tacos, sandwiches and other food. They are allowed in Oceanside, Carlsbad, Vista and San Marcos, vendor John Adams said this week in a telephone interview.

“I think the city’s missing out on a lot of good food,” said Adams, who operates the “epic eatz” van.

City Manager Clay Phillips said city officials see having more mobile food trucks as a potential part of plans to spur economic development in Escondido. But he said officials were still formulating a plan for how to regulate them.

Redlitz said the Amgen Tour of California bike race, which is expected to return to Escondido next spring after a four-year absence, would be a great opportunity for food trucks. The city is expected to be the “starting line” host, which includes a full week of parties and events.

Mayor Sam Abed said he was pleased the county would now be regulating the trucks, noting that they are frequently in Escondido already under special event permits at street fairs and festivals.

“For anyone who doesn’t understand what a mobile food truck is, it’s a ‘roach coach’,” he said.

Find the entire article by DAVID GARRICK at nctimes.com <here>