Dearborn, MI — One night each month, the streets of downtown Dearborn come alive with the one-of-a-kind tastes and the flavors of gourmet street food. 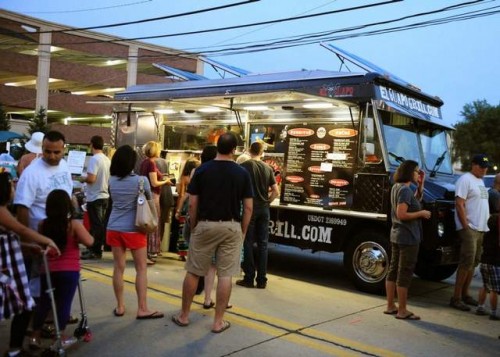 The sizzle of hot dogs and smell of tacos pervade a stretch of West Village Road, where eight restaurants on wheels — and a live band — set up shop for a few hours to introduce their Mexican, Middle Eastern and American cuisine to a couple thousand customers. It’s a scene more common on a street corner of New York or Los Angeles than in suburban Detroit.

“When we come to town, people are curious about it and they come and check us out,” said William Anatra, as he served $2 hot dogs from a baby blue 1965 Volkswagen pickup dubbed Franks Anatra. “We’re like a circus.”

His mobile eatery is among a growing number of food trucks canvassing Metro Detroit. Food truck rallies similar to Dearborn’s have popped up in Royal Oak, Ferndale and Detroit’s Eastern Market and New Center.

Not too long ago, less than a handful of mobile restaurants were operating in the region; now more than a dozen food trucks are offering inexpensive gourmet grub and the number is expected to grow, observers say.

“At first I thought it was a fad but it seems to have staying power,” said Bonnie Riggs, a restaurant industry analyst with The NPD Group, a New York-based market research company. “It’s still pretty small in Michigan but it hasn’t gone away. You hear more and more about it growing.”
Find the entire article at the Detroit News <here>