A food trend sweeping North America is luring entrepreneurs out of their boxes and into much smaller, aluminum-clad ones. On wheels.

Popularized by the Food Network show Eat St., trucks that specialize in serving up gourmet curbside grub – everything from artisan grilled cheese sandwiches and perogies to lamb’s tongue – are increasingly pulling creative, business-minded foodies into the streets. While some owners are launching second careers, others see the food trucks as a low-risk way to road test their dream restaurant concept. 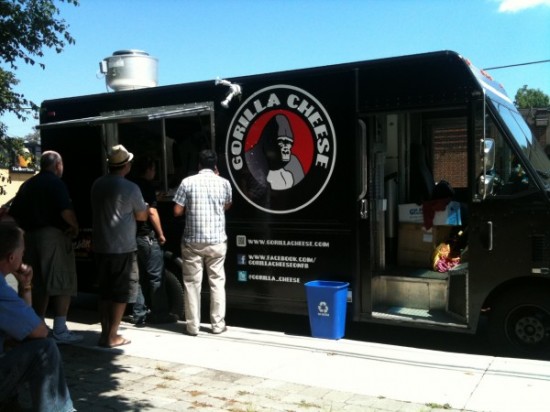 Twitter-fuelled lineups have been known to stretch several city blocks during weekday lunch service in cities across the country, from Vancouver to Calgary, Toronto and Hamilton. Weekend events have been drawing thousands more than organizers expected.

Does the hype translate into instant economic success? Not exactly. Food truckers say that thriving on the street isn’t as simple as mastering social media – although it helps – and hiring a kid to mind the fryer.

“It’s like celebrity status, having a truck right now,” said James Boettcher, proprietor of Calgary’s Fiasco Gelato food truck and the head of YYC Food Trucks, an association representing the city’s food truckers. “You drive down the street and people are pointing. The hot-dog guys that have their little carts on the corner, they’re losing their minds.”

“I was standing in the East Village in New York last summer. The Big Gay Ice Cream Truck pulled up and people came running out of their apartments and swarmed them,” Mr. Bankowski recalled. “It was unbelievably cool. I rounded the corner and there was a taco truck. I rounded another and there was a Korean barbecue truck. I was inspired.”

Despite a decade’s worth of experience in the restaurant business, Mr. Bankowski needed to do some preliminary research before rushing out to buy a truck. He knew it wouldn’t require the same amount of overhead as his restaurant – no glassware, tables, plates or chairs – but the profit margins he could expect were not clear.

Data on the business of food trucks is scant. Most cartrepreneurs find themselves interviewing the potential competition to get a sense of the numbers.

Mr. Bankowski, who now operates one of Calgary’s most successful mobile vending businesses, Perogy Boyz, learned early on that food trucks typically bank a profit equivalent to about 40 per cent of sales (for a bricks-and-mortar restaurant, the number is closer to 15 per cent).

“That’s the spark that gets people going,” he said.

What keeps their interest burning are relatively low entry costs. Opening a restaurant can cost upwards of $300,000 before a customer walks in the door, but launching a food truck starts at about $35,000, said Lizzy Caston, an urban planner and food writer who advises municipalities on how to enable sustainable street-food cultures.

Most look to buy used trucks from the U.S. west coast, where food trucks have long operated. Costs can climb rapidly, depending on the complexity of the kitchen equipment and customization.

But mobility gives operators another an edge over bricks-and-mortar restaurants. “You can go where the people are,” Ms. Caston said. “You’re not stuck in a location that can’t make money.”

It also helps that one of the most important tools of the trade – social media – is free to any food truck operator who can master how to use it.

“Before we made one sandwich, we had 1,000 Facebook followers,” said Graeme Smith, a laid-off steel worker who is now co-owner of Gorilla Cheese, a Hamilton-based truck that opened this year. “I knew we could build it big, but I didn’t expect this kind of response,” he said, adding that more than 50 per cent of his daily clientele track his location through social media.

Among food trucks, the observation is common.

“We’ve been open less than 75 days and we have close to 4,000 followers on Twitter,” said Mr. Bankowski. “Social media gets you pretty far.”