SALT LAKE CITY, UT – Have a hankering for a late-night burger or sushi roll served fresh on a downtown sidewalk? Hoping to grab a healthy, albeit quirky, lunch on the run? 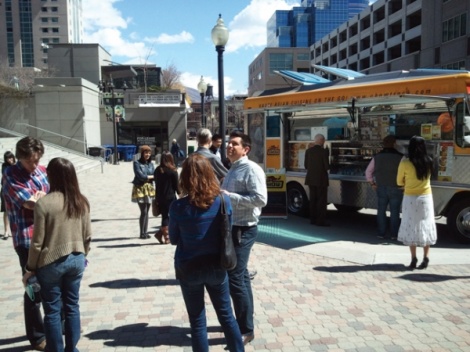 Get your snack on, Salt Lakers, because relaxed rules for long-restricted food trucks appear ready to satisfy City Hall.

The Planning Commission voted Nov. 30 in favor of a new ordinance that would give food trucks 12-hour stints (not the current two hours) to operate. It also would allow vendors to set up their mobile cuisine on city streets and sidewalks, on private property with permission, and in a cluster called a “mobile food court” with a permit.

“The reality is, the market really wants them here,” says Jessica Thesing, the city’s small-business liaison. “They provide a different food experience, so people are pretty excited to see them around town.”

The City Council is expected to take a final vote on the proposed changes early next year.

The mobile-food craze rolled into Utah late. But since 2010, high-quality vendors such as SuAn Chow’s Chow Truck — forced to update her roaming whereabouts via Twitter — have built a customer base and spawned imitators.

On Thursdays at lunchtime, it is not uncommon to see a half-dozen food trucks lining the Gallivan Center plaza — allowed through a Gallivan-initiated permit. The new rules would allow one truck per block on a public right of way, so long as it is at least 100 feet from a restaurant and the vendor pays for parking.

Find the entire article from the Salt Lake Tribune <here>