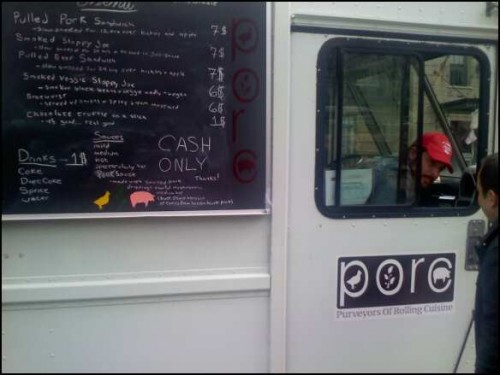 Porc Mobile was born when Josh Saltzman pooled money to buy a white mail truck and convert it into a roving kitchen, dishing out barbecue and baguettes topped with goat cheese on Washington’s city streets.

“It’s crazy,” said Saltzman, 25, whose truck has three sinks, a hand-washing station and hot water. “There’s a misperception about these old model of roach coaches.”

The new model being set by Porc Mobile in Washington and Rickshaw Dumpling Bar in New York has moved beyond hot dogs and ice cream to miso soup, lobster rolls and crepes. Mobile food- preparation businesses increased 15 percent over five years to make up 37 percent of the $1.4 billion of U.S. street vending revenue in 2011, according to researcher IBISWorld Inc.

With that increase has come more concern about safe food handling by regulators and complaints by restaurants without wheels.

New York is weighing letter grades that reflect inspection histories, and Boston now requires healthier menu items to be sold. A proposal in Washington to mandate shorter operating hours than restaurants at night has sparked a petition drive in protest, and California lawmakers faced a backlash in March over a pitch to ban roving eateries near schools in an effort to prevent children from buying less nutritious food.

“The food truck craze hit with some serious power, and cities are scrambling to respond,” Saltzman said.

Food trucks are multiplying as a sluggish economy has diners looking for deals and social media lets consumers track the eateries’ locations online, according to an August 2011 report by IBISWorld. The trucks can cost $40,000 or more and may feature tools found in traditional restaurants, such as certified kitchen equipment. They may have hot water heaters, employees trained in safe food handling, and menu preparation at off-site commissaries to reduce the risk of contamination.

“We need more consistency across state jurisdictions,” Susan Vaughn Grooters, director of research and education at Chicago-based STOP Foodborne Illness, an advocacy group, said in an interview. “You have to worry about cross contamination. Restaurants have access to working bathrooms and food preparation. On a food truck, it’s limited.”

In Los Angeles County, sickness linked to food trucks and hot carts has risen to 33 illnesses in 2011 from 21 in 2009, according to the Public Health Department. Those numbers likely are underreported, Terrance Powell, director of the bureau, said in an interview.

The county has 13 inspectors to oversee mobile food facilities, of which 2,428 are trucks offering prepared or gourmet food, and those are just the trucks the county knows.

Find the entire article by Stephanie Armour  at businessweek.com <here>