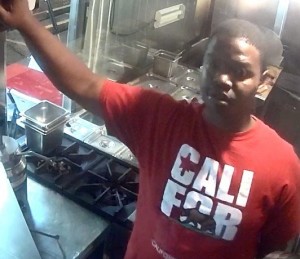 PHOENIX, AZ – Police are looking for an armed man they said burglarized a food truck in Phoenix during the summer.

The suspect went into the truck that was parked in the lot near 33rd Avenue and Indian School Road around 10:45 p.m. on June 29. He had a gun with him. The man stole money from a lockbox and a tip jar. He then ran off, police said.

No one was inside the truck at the time.

The suspect is described as a black man, about 18 years old, 5’9″, 220 lbs. with black hair and was wearing a red California Republic t-shirt, white pants and black shoes.

Find the original article with video at azfamily.com [here]