Hoboken Food Truck Law Not Yet Ready for Vote

While the new food truck policy in Hoboken hasn’t been completed yet, and still has to go through two votes by the city council, the Vegan Lunch Truck has already announced it may leave Hoboken in 2012. 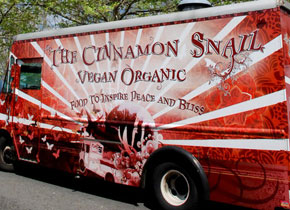 Adam Sobel, owner of the Vegan Lunch Truck and its primary chef, said on Twitter that “We will not renew our license for 2012” if the new policy passes.

He also asked his Twitter followers in which New York City neighborhoods he should park his truck, indicating that he will park the mobile vegan restaurant in the city instead of Hoboken. Sobel also works from Red Bank, his hometown.

The first proposed draft of the new policy would have put the annual cost for permits to operate a food truck at roughly $5,000. While the measure was passed on first reading by the city council, a council subcommittee has returned to the drawing board since.

Newer ideas included lowering the fee to roughly $3,000 per year, and allowing trucks to park for four hours at a metered spot.

Find the entire article by The Hoboken Patch <here>