SEBRING, FL – Entrepreneurs could seek a lawsuit against the county, and the municipalities, claiming local ordinances restrict and are hindering their rights to conduct business.

“Well, we are trying to work this out with the county, but right now their ordinances keep us from doing business and creating jobs,” said Jim Martin, president of the Florida Hot Dog Vendors Association. 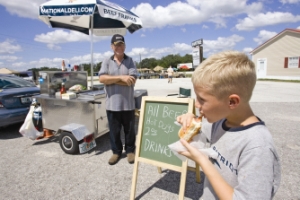 Martin, and several others, discovered that it was illegal for them to vend along county roads or on county property like beaches and boat ramps and the municipalities down right prohibited vendors.

“We just want to be able to sell our products and conduct business; right now the county and the cities are keeping us from doing that,” Martin said.

Martin sought out a solution by addressing the county commission in August, but has seen no progress on the issue, he said.

“We approached them and thought we were making headway. Now we are tabled indefinitely, leaving us in limbo. We can’t wait forever; we have a business to run,” Martin said.

Martin added that he felt commissioners and county staff were not making “business and job creation” a high priority and that the city governments would not even discuss the matter with him, he said.

According to Martin, if the county lifted its ban on vending, he and several others would be able to sell six days a week instead of waiting on events, and that could put not only him, but an additional six to eight people to work.

“We pay, as an average, $10 per hour for help. I know that I would put people to work right away, and so would the other guys. It’s a matter of being allowed to do business. The county is stifling the opportunity,” Martin insisted.

Martin discovered in July that the county, as well as the municipalities, have ordinances in place that prohibit someone from setting up and selling products without a brick-and-mortar store, and say that is a violation of their rights under the Florida Constitution.

“We don’t want to seek legal action if we can avoid it. Right now there are suits in other communities filed by the Institute for Justice seeking to reverse ordinances that prohibit vendors like us,” Martin said.

“I am making a formal request to the Institute to file suit. I have talked to several of their attorneys, and they are willing to look at our case,: Martin said.

The Institute for Justice filed suit in October against the city of Hialeah for prohibiting vendors like Martin.