How Food Trucks Survive the Winter

SAN FRANCISCO, CA – If your main source of income is foot traffic, then a cold, wet winter weather can do more than just dampen your spirits — it can dampen your sales considerably. 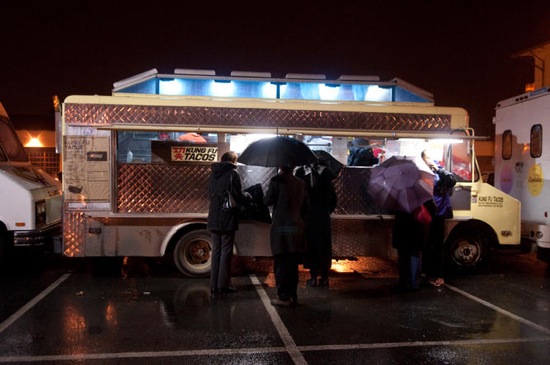 When food trucks, especially new ones, face their first winter, the three-month hurdle can be daunting. Off the Grid, where many trucks ramp up sales, sends its biggest location — Friday nights at Fort Mason — into hibernation after Friday, and trucks who used the gathering’s large crowds to ensure good sales will have to look elsewhere for a few months.

For trucks with brick-and-mortar restaurant outlets to fall back upon, winter can be slow but manageable, especially with the benefit of a few years’ experience. But for food trucks that are new to the game, the first winter can be a challenge.

Evan Kidera, who set his Filipino taco truck Señor Sisig loose on city streets in June 2010, said the truck’s first winter was a bit of a rude awakening.

“We started in summer, and got swamped because it was high season,” he said. Kidera said Matt Cohen, Off the Grid’s organizer, warned them to prepare for winter months, “but you never really know until you go through it.”

“The rain, the bad weather, a tire might go out on your truck,” Kidera said. “A lot of little things you don’t expect to happen will happen. During your first year, someone can only tell you so much.”

Señor Sisig survived to spend another year serving its signature sisig tacos, and Kidera said he’s planning ahead for this winter — including some well-deserved vacation from a seven-day-a-week work schedule. Last year, they tried to work the holidays, including New Year’s Eve, but business was slow and the night was a net loss.

Other restaurant owners who manage trucks alongside brick-and-mortar restaurants find the winter easier to navigate since they have more options to fall back on.

“We’ve been around for two years, seen two winters already, and this’ll be our third,” said Akash Kapoor, who manages Curry Up Now’s three trucks and one restaurant. “It affects the way you prep, your timing, and so on and so forth.”

Curry Up Now’s trucks — two in the city and one on the peninsula — serve “rain or shine unless it’s not safe,” and Kapoor said they only canceled their runs on one day last winter because of stormy weather.

Sanguchon, three-truck effort serving Peruvian street sandwiches, is facing its first winter, but it’s an offshoot of three restaurants — two in the city and one in Half Moon Bay — with a established catering service, which means it has income to lean on during winter.

“We work a lot with Off the Grid and have a lot of corporate events coming in, especially for December, and we’ll do private events, lunches for offices, I’m sure,” said manager Shu Altamirano. “We know what we’re doing.”

The earlier evenings and cold rainy weather slow sales even for bustling Off the Grid, especially at Fort Mason, which lets vendors do tented stations instead of just trucks, but also has to grapple with a location that’s more exposed to the elements.

But a shift in schedule and focus during winter can help incubate some good ideas for the upcoming spring at Fort Mason when it returns in March, Cohen said.