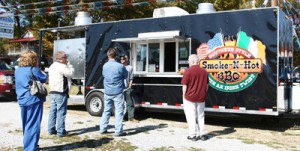 Several changes were made to a proposal introduced by Brown last month to satisfy the concerns of truck operators. The proposed legislation was the focus of public outcry after food truck owners said it would make running a successful food truck business impossible in the city.

Food truck vendors will be allowed to operate from 6 a.m. to 3 a.m. The draft previously shut down operations at midnight.

The language was modified to allow food trucks to be in residential neighborhoods if it has a written agreement with a homeowner to cater an event.

City lawyers clarified confusion over language requiring bathrooms, saying the policy applied to those giving away food like a church to the homeless and not where it’s being sold for profit.

Jennifer Kline with Up in Smoke BBQ said she’s happy Brown and other city officials are listening to their concerns.

“I just hope that we can come to an agreement which I think we can. I hope that we can start getting some more space for food trucks to park downtown as well as other areas of Jacksonville,” she said.

Reggie Brown said he learned a lot from the food truck operators about what state regulations they already work under.