Some chefs are cashing in on the growing appetite for gourmet food on the go. 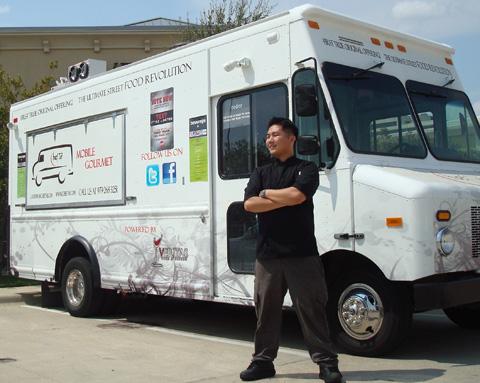 Food on the go in the United States has come a long way since the chuck wagon brought basic provisions to pioneers settling the American west back in the late 19th century.

Those antique modes of mobile food have since been replaced by gourmet food trucks, serving up a staggering array of mouth-watering cuisine, including lobster, pan-Asian food, nouveau Tex-Mex, cupcakes and even American-Indian fry bread.

“It’s blowing up everywhere,” said Richard Myrick, editor-in-chief of Mobile Cuisine Magazine. “While statistics are hard to come by, right now the country has between 3,000 and 4,000 gourmet food trucks. Every week there are probably six to 12

[new] trucks hitting the streets. The growth is exponential and there’s no indication of a slowdown.”

His Mobile Gourmet Food Truck, which is based in College Station, Texas, was recently named “America’s Favorite Food Truck” during a contest run by the popular television specialty channel Food Network.

“I opened the food truck to share my passion and love for the food with more people at a much lower price of entrance,” said the Korean-born chef, who has no formal culinary education.

Lee said hia Korean heritage played a big role in his own recipes. He described it as a fusion of several Asian cuisines with a southern twist. He said his family loves to cook and try out new foods, and that as a kid, he was taken to a lot of different of restaurants in Korea.

Lee came to the United States—by himself—when he was 13.

“I came here for the first time in 1992, and I simply couldn’t believe there was green grass on the elementary school’s playground, and a football stadium in a high school,” he said. “I told my parents I wanted to study in a better educational system and, after three months of negotiation, they allowed me to come here to study for a year and stay at my grandparents’ house–as a try out. I am still here!”

Lee said he had a very clear mission from his parents.

“If I didn’t make the grades, they would yank me back to Korea,” he said.

He made the grades but then faced a different challenge—convincing his parents to let him pursue a culinary career.

“My parents were extremely disappointed with my decision to go into the culinary world since I was the first kid in the family to attend university and had a lot of hopes and dreams riding on my back,” he said.  “They asked me to change my mind because they perceived the culinary world as lower-class work, as do many older generation Korean parents.”

“While I was a student, I needed a job, and since I liked sushi so much, I figured I would apply at a local sushi bar to learn how to make sushi and make money at the same time,” he said.  “At the time, I was an aspiring student with my eyes on Wall Street and thought knowing how to make sushi would be a great skill later in my life to entertain my guests.”

“I am glad I am not in the financial sector these days,” he said.

According to Myrick of Mobile Cuisine, there are two trends driving the food truck boom, which has its origins in the Los Angeles area. First is the economic recession that started in 2008.

“You had a lot of restaurants closing down and a lot of unemployed chefs who were looking to prepare food,” he said. “They couldn’t get a loan, but they could get $50,000 to get a food truck.”

A second factor is the prevalence of social media tools, particularly Twitter.

“Food truck operators don’t really need to spend money on advertising,” Myrick said. “It would have become a small localized thing without social media. People are able to share with others what they’re eating and when they’re eating.”

Lee said social networks aided his big to be named America’s Favorite Food Truck, largely because of a large network of Texas A&M alumni helped spread the word online that his truck was in the competition.

There is no sign to an end to the craze, and Myrick said the new trend in weddings is to have well-known food trucks cater them.

He said ironically, many of the formerly unemployed chefs are opening brick and mortar locations due to the success of their food trucks.