LOS ANGELES, CA – The thousands of people working in the commercial high-rises along Wilshire Boulevard in the Miracle Mile district are going to have fewer lunch options now that the L.A. City Council approved a measure Wednesday that will restrict food truck parking, according to a news source. 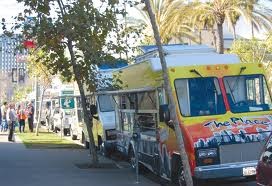 Anyone who’s driven down Wilshire Boulevard near LACMA has noticed that the south side of the street is filled with food trucks dishing out ethnic eats and American fare.

These food trucks have been a bane to restaurant owners in the area, who say it’s unfair these mobile eateries are siphoning off business from “’brick and mortar’ restaurants that are heavily taxed and regulated,” the Park Labrea News and Beverly Press newspaper reported.

Council members unanimously approved the measure Wednesday, which stated, “trucks that are larger than 22 feet long and seven feet high are prohibited from parking in spaces with oversized vehicle restrictions along Wilshire between Fairfax and La Brea avenues from 9 a.m. to 4 p.m.”

“It makes the street safer for everyone,” LaBonge reportedly said during the meeting. “It’s the safety that I’m concerned about, and I think it works it out.”

While the ordinance impacts any oversized vehicle, Matt Geller, CEO of the Southern California Mobile Food Vendors Association, said it was aimed at the food trucks along Wilshire Boulevard.

He said the trucks do not block visibility, and that officials have “clearly” not shown that the trucks pose a public safety issue. Geller said the city simply doesn’t want to work with food trucks.

“We’ve tried to work with Councilman Tom LaBonge’s office, but we’ve been shot down multiple times,” he said, referencing the city of Santa Monica, which created food truck restrictions by working with the area vendors. “The real losers are all the consumers. This is just really short-sighted.”

Geller said there are plenty of vendors with trailers or carts that would fall under the size restrictions. Those vendors may flourish under the new restrictions, but demand will spike for the spots along Wilshire Boulevard and consumers will have fewer menu options when dining at the trucks, he said.

“This clearly doesn’t work for everybody,” Geller said, adding that there were no studies conducted to further identify any issues.

On Wilshire, food trucks tend to congregate near LACMA, between Fairfax and Curson avenues. In that area, oversized trucks will lose as many as 20 spots on the south side of Wilshire Boulevard, while retaining as many as 20. There will be no parking for oversized vehicles from Orange Grove Avenue to Ogden Drive, and between Curson and Masselin avenues.

LaBonge said he worked with the city’s Department of Transportation to create the ordinance. He said the department will post notices about the restrictions before enforcing them within 30 days.

“There’s room for everybody,” LaBonge said.