LOS ANGELES, CA – Until the recession hit, operating a business on wheels seemed like a slick job to many L.A. immigrants.

But soaring gas prices dug into what had been decent profits for ice cream truck operators and fewer blue-collar workers willing to spend on snacks chipped away at the sales of people pushing around small food carts. 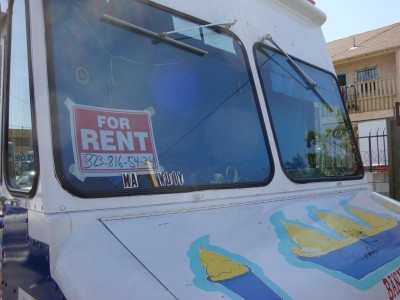 Though neither the marcoeconomy nor the microeconomy had shown improvement, L.A. county supervisors earlier this year voted to dramatically increase the cost of doing business for ice cream vendors like George Calgua, who’s been at it since 2004.

“Everybody’s broke,” he said of Los Angelenos. “A lot of people are not working. A lot of companies are putting people out. We need to work though. For every one of us, this is expensive.”

This amounted to a raise in the annual fee food truck operators must pay the county by 13 percent to $787. Push-cart fees doubled to $602.

The changes were part of massive restructuring of county health department fees paid annually by owners of everything from swimming pools to apartment complexes to restaurants to the food trucks.

The department had been calcuating how much it cost them to inspect every small restaurant in the county, for example. It then divided the total cost by the number of restaurants. Now, fees will be calculated from the bottom-up, based on how much it costs to do a single inspection for a small, low-risk restaurant. That means the fees would stay pretty much the same in the event dozens of resturants shut down one year.

County officials said they had been going years without matching fees to the actual cost of inspections they are collected to cover.

“We had to make some very painful decisions this year to match reality,” said Angelo Bellomo, the county’s environmental health director. “This likely won’t happen again. This happened because the methodology drifted over time.”

Ultimately, 75 percent of food establishments saw their fees increase while 25 percent enjoyed decreases. Of those that saw increases, the ice cream trucks and push carts at the bottom of the totem pole say they felt it worse.

“They know the economy is bad and they are doing this,” said Mauricio Funes, a manager at Durango Paleteria and Continental Ice Cream, which lease out trucks, carts and parking spots to operators.

The fees hadn’t been raised since 2007, though they were reviewed annually. Until this year, a reserve fund helped cover increased labor costs.  With no reserve to tap this year, county officials realized revenues would need to come in 14 percent higher in the 2011-2012 fiscal year to meet the cost of handling inspections for more than 100,000 spots.

A consultant hired by the county found, for instance, that the incorrectly low fees for ice cream trucks and food carts were leading to an annual shortfall of more than $310,000.

“2011 became the year we had to make adjustments,” Bellomo said.

The revolution in Los Angeles could spread statewide, as other county health departments are keeping an eye on this and several other inspection-and-fee-related changes the county is considering.

“Everyone’s now looking to align fees with the actual costs to make them defensible as a matter of public policy,” Bellomo said. “That’s really what we should be doing. Throughout California, they really haven’t done the catch-up.”