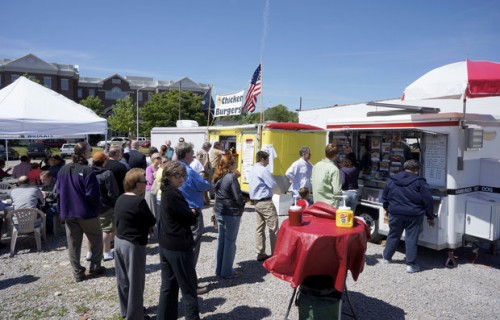 LEXINGTON, KY – The Blue Grass Food Blast, Lexington’s food-truck extravaganza on Main Street across from Thoroughbred Park on Friday and Saturday, was a roaring success, organizers said. Vendors sold out of food on both days, and an estimated 1,300 participants attended.

That run of success came to a halt Monday at the city’s Itinerant Merchant Task Force meeting, where representatives of city government, social agencies, brick-and-mortar restaurants and mobile food servers met for more than 90 minutes without advancing a plan to give the food trucks a set of allowed locations, rules and fees governing their operation.

The mobile food vendors have campaigned for a pilot project that would rotate food trucks and carts among several locations downtown.

Council member Diane Lawless said the city needs to examine locations outside of downtown where the trucks and carts can operate.

“I don’t think it’s just downtown where they can operate and make money,” she said.

She also repeated her concerns about the trucks’ not interfering with brick and mortar restaurants, other businesses and homes.

The task force’s discussion frustrated Amanda Tibbetts of Cluckin’ Burger, who provided committee members with the numbers cited for the Food Blast.

“Given wait times in excess of 45 minutes and a slew of full, happy customers, we now have the empirical and anecdotal evidence this body was seeking,” she told task force members.

Find the entire article by Cheryl Truman  at kentucky.com <here>