LOS ANGELES, CA – Los Angeles police officers opened fire on a suspect armed with a machete. He attacked another man inside a food truck, and then smashed the vehicle into two parked cars.

The incident happened on Saturday shortly before 4 a.m. at Beverly Boulevard and Berendo Street in the Westlake District. 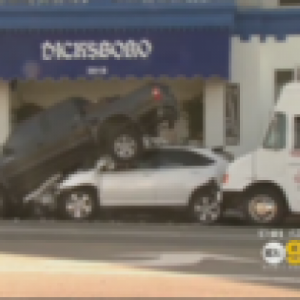 Investigators say the victim was eating outside the taco truck when he was attacked by a machete wielding suspect.

The man with the machete then dragged the victim into the food truck. The two employees inside managed to escape before the suspect took off and crashed the truck into several parked cars.

When officers arrived, the suspect exited the truck carrying a bloody machete.

“Officers ordered the individual to drop the machete numerous times,” said Lt. Andy Neiman from LAPD. “The suspect was noncompliant. They then deployed a Taser that was also ineffective. As a result an officer-involved shooting occurred.”

The suspect was taken to the hospital in critical condition. The stabbing victim is in stable condition.

“The community is lucky the officers got there as fast as they did,” said Neiman. “Hopefully we find the motive for this horrific incident.”

No officers were injured. The investigation is ongoing.

Mobile Cuisine sends out our best wishes to the victims of this crime, and will keep you up to date on the facts of this tragedy as they unfold.