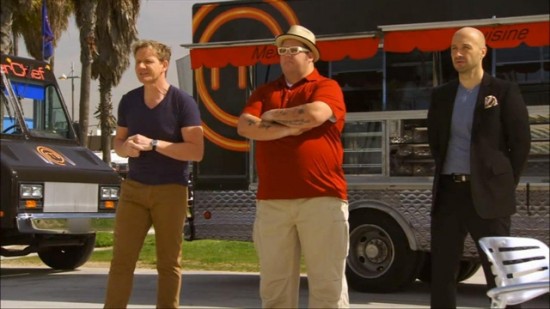 Gordon Ramsay’s Master Chef instituted a food truck team challenge this week. Three teams went head to head to see who could raise the most money for charity.

Stacey, who won last week’s elimination challenge, got to choose her team first. She opted for Tali, Frank and Becky as team members. Then she got to choose which four of her fellow contestants would make up the other two teams. For one team, she chose Monti, David, Anna and Tanya. For the other, she chose Felix, Christina, Mike and Josh.

Stacey chose the color red for her team. That meant they would cook Mexican-style cuisine. She chose yellow for Monti’s team, who cooked American cuisine. The blue team was left with Indian cuisine.

The yellow team chose Anna as their team captain. Josh volunteered to lead the blue team, which zeroed in quickly on a menu of Tikka Masala Chicken with slaw.

The red and yellow teams started off disjointed, opting for two main dishes. The red team started out with both a meat-based and vegetarian taco. The yellow team considered making two different types of sliders. However, after Chef Ramsay pointed out the error of their ways, both teams decided to streamline. The red team went with a meat taco while the yellow team decided on a Texas-style burger.

Sadly, streamlining their menu didn’t seem to help the yellow team. Two minutes before opening, they still hadn’t managed to get a single hamburger on the grill. Chef Ramsay chastised and berated them until they finally got moving. However, then they failed to cook the meat properly, serving raw burgers which the chef also had to point out.

The blue team moved liked a well-oiled machine and kept their food truck patrons happy. They retained a solid stream of customers throughout the challenge.

Team red experienced a sudden drop off in customers toward the end of the challenge. So Stacey went out and drummed up new business, putting her food truck back in action very quickly.

When time got called, Chef Ramsay announced which teams made the most of their $7 dishes. The winning team far outdistanced its competition by earning $798 of the total sales amount of $2,000. Team red won nearly half the money for the charities of Save the Children and the Boys and Girls Clubs of America.

Coming in second, $154 ahead of its competition was team blue. Yellow team lost the challenge. That meant they would endure the dreaded Pressure Test.