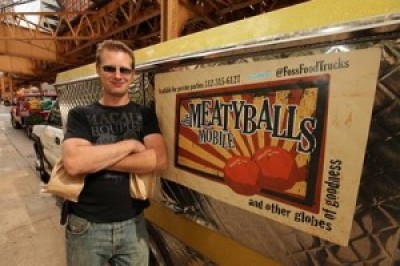 CHICAGO, IL – Once they were the future—food trucks, bringing innovative new tastes to the hungry masses of the Loop and other places where drab fast food dominated. It was Phillip Foss with Meatyballs Mobile and Matt Maroni with Gaztro-Wagon who led the movement to change the city’s laws and attitudes toward food trucks and make them the center of street-level culinary innovation, way back in 2010.

Foss and Maroni were also two of the first food-truck burnouts, both switching back to a brick-and-mortar life after a year or so. In Foss’s case, he went back to fine dining in his own way, turning his food-truck prep kitchen on a dead-end south-side street into a permanent nighttime pop-up restaurant, El Ideas. (He also went through a divorce precipitated, in part, by the impossible lifestyle of fine dining at night and food-truck prepping in the morning and service in between.) Now El Ideas has a Michelin star and Foss is a semifinalist—the first shortlist—for Best Chef, Great Lakes, in this year’s James Beard Foundation awards.

And to celebrate that, last Thursday Foss took the Meatyballs Mobile back on the road for the first time in two and a half years. I went along with him and his girlfriend, Akiko Moorman, as he and his balls (variations on that joke being an integral part of the brand) returned to the world they’d helped create.